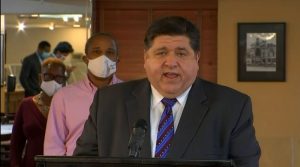 Gov. J.B. Pritzker speaks at a news conference in Chicago Tuesday, Sept. 15. He announced the next round of Business Interruption Grants and warned of future state budget cuts without further federal government intervention. (Blueroomstream.com)

SPRINGFIELD – State agency heads are preparing to cut 5 percent of their budgets in the current fiscal year and 10 percent next fiscal year should the federal government fail to provide aid to state and local governments, Gov. J.B. Pritzker said Tuesday, Sept. 14.

The governor made the announcement at a Chicago restaurant during a news conference called to announce another $245 million in grants aimed at giving a boost to businesses hit hard by the COVID-19 pandemic and civil unrest.

That includes $220 million in Business Interruption Grants for businesses suffering losses due to the COVID-19 pandemic. The funding comes from the federal Coronavirus Aid, Relief and Economic Security, or CARES, Act.

That was a more than $2 trillion stimulus package passed by Congress and signed into law in March. Partisan disputes in Washington, D.C., however, have stalled follow-up legislation, which several U.S. governors, including Pritzker, have said needs to focus on aid to states.

“Let me repeat that every state in the nation has suffered, every municipality in the nation has suffered from the fiscal effects of COVID-19,” Pritzker said. “However, until Republicans in Washington decide otherwise, middle class, working class and poor families across our state and across the nation will likely suffer from cuts to public safety, education, human services and environmental safety, and the potential layoffs will make the economic recession worse.”

He called the potential for cuts a “nightmare scenario” for entities such as schools, hospitals, universities, law enforcement, health care workers and firefighters.

While the state has already distributed more than $49 million in federal BIG funding, applications for the next $220 million will open Thursday. Application information for the second round of funds can be found on the Department of Commerce and Economic Opportunity’s website at Illinois.gov/dceo.

Grants will range from $5,000 to $150,000 to each business based on revenue losses incurred due to the ongoing pandemic and the size of the business.

Businesses and nonprofit entities with $20 million or less in revenue last year will be eligible, with a focus on businesses located downstate or in disproportionately impacted areas, according to the governor’s office. At least $100 million will go to businesses in downstate and rural areas of Illinois.

Disproportionately Impacted Areas will see $70 million set aside. Those are defined by zip codes identified by the General Assembly for communities seeing the most economic distress due to the pandemic. Another $5 million will be set aside for businesses facing livestock production disruptions.

Another $25 million made available through the Rebuild Illinois capital infrastructure plan will go toward helping businesses in communities damaged during civil unrest following the killing of George Floyd by a police officer in Minneapolis in May. Projects may range in size from $1,000 to $200,000, based on the extent of the damages.

Applications will be available “in the coming weeks,” according to the governor’s office.

Pritzker also signified he is not willing to make a “political decision” to allow high school football to resume.

“This isn’t a political decision. I know that there are people who would like me simply to make a political decision to allow people to endanger themselves,” he said, noting that surrounding states allowing football to be played have higher positivity rates than Illinois.

“If they’ve decided to endanger children and families in those states by allowing certain contact sports to take place, that’s their decision. That’s not something that’s good for the families, the children of Illinois,” he added.

The news conference came as the state reported another 1,466 new confirmed cases of the virus among 39,031 test results reported over the previous 24 hours. The Illinois Department of Public Health also reported another 20 deaths in people from their 60s to their 90s.

At the end of Monday, Sept. 14, 1,584 people in Illinois were reported hospitalized with COVID-19, including 373 in intensive care units and 144 on ventilators. Those were all slightly above pandemic lows and significant increases from the previous day.

The state’s two regions that have seen increased mitigations due to high positivity rates both saw their numbers drop, according to the latest data from IDPH. Region 7, which includes Will and Kankakee counties, has a 6.9 percent rate as of Sept. 12. That’s still slightly above the 6.5 percent needed to remove mitigations such as closure of indoor dining, but it’s a decrease of three-tenths of a percent from the day prior.

In the Metro East region, known as Region 4 in the reopening plan, the rate decreased two-tenths of a percentage point to 9.2 percent as of Sept. 12. That region was still far away from mitigations being lifted despite the progress.