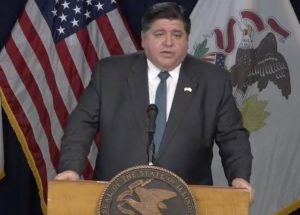 SPRINGFIELD — All 11 of the state’s mitigation regions will face stricter COVID-19 based restrictions by Wednesday due to increasing positivity rates, while opposition grows from some bars, restaurants and other small businesses struggling during the pandemic’s economic downturn.

“The virus is spreading. And every region of the state is suffering from its insidious, invisible contagion,” Gov. J.B. Pritzker said Monday, Nov. 2 during his daily COVID-19 briefing.

“Nothing we can do will immediately reduce the positivity rates, or hospitalizations, but our resurgence mitigations are designed to have an impact over several weeks as long as everyone takes some responsibility for masking, social distancing and following the (U.S. Centers for Disease Control and Prevention) and (Illinois Department of Public Health) guidelines. Just like driving a car, when someone blows through a stoplight, they not only risk their own life, but also the lives of all the drivers around them. Right now, the stoplight is red. Please act accordingly.”

According to the governor, the past week was one of the worst single-week increases in regional positivity across the state since the spring, with none of the regions experiencing a decrease in their positivity rates.

Last week, the Illinois Restaurant Association called on Pritzker to consider alternative mitigations to reduce the hardships that many restaurants are already experiencing. The organization also said it plans to file a legal brief in support of pending lawsuits from restaurants challenging the administration’s executive orders.

A group of more than a dozen restaurants in Springfield also filed a similar lawsuit against Pritzker on Friday. The new restrictions have also received pushback from some local leaders, including Orland Park Mayor Keith Pekau, who have said they would not enforce them.

“All we’re asking is for simple enforcement,” Prtizker said in response to a question about pushback to the new restrictions. “Many, many restaurants and bars are doing the right thing. They’re either using outdoor tents, or they’re just providing pickup and delivery service or drive through during this difficult period.”

But the governor also said some officials are choosing not to do the right thing.

“I would encourage people to speak to their local leaders and remind them that leadership means making some difficult decisions,” he said.

Pritzker also touted the number of local businesses that have benefited from federal stimulus funding released by the state — the Business Interruption Grants program and the Local Coronavirus Urgent Remediation Emergency (or Local CURE) Support Program.

“Until we can reduce the upward movement of hospitalizations and bring the rate of spread down, we must keep our economy moving forward, and support our small businesses,” Pritzker said during his briefing. “And I encourage everyone listening to support your local small businesses. These are the heroes who are the lifeblood of our communities, and they are job creators.”

The Illinois Department of Commerce and Economic Opportunity has distributed $95 million in BIG funds to businesses through 4,000 individual grants, and there remains $175 million in program to disburse, according to the governor’s office.

Nearly $50 million has also been distributed from the CURE program, which reimburses local governments for COVID-related expenses. About $31.9 million in CURE funding is in the process of being distributed, with $170 million remaining.

Both the BIG grants and Local CURE funding comes from the federal Coronavirus Aid, Relief, and Economic Security Act, also known as the CARES Act.

Tania Hernandez, a business owner who has benefited from BIG funds, spoke at Pritzker’s daily press briefing about how the grant money helped keep her dress shop from failing due to the ongoing pandemic, as her business pivoted to making masks instead.

“The BIG grant that was provided by the state was essential for us. It allowed us to keep our employees and pay rent. Without this financial help, it was impossible for us to survive.

“We’re facing critical times but the BIG grant has been a lift for us,” Hernandez said.

Still, Pritzker said, more is needed in the way of aid to struggling businesses.

All regions of state now under COVID resurgence mitigations