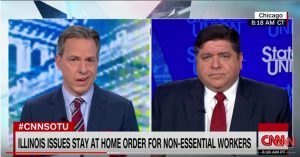 Gov. J.B. Pritzker appeared Sunday morning on CNN’s “State of the Union” show with Jake Tapper and said, “There is no doubt that the economy is being significantly harmed by the delays that the federal government had during January and February getting going dealing with this. That’s why we’ve had to go on stay-at-home orders or keeping kids at home or closing bars and restaurants and so on.”

SPRINGFIELD – Gov. J.B. Pritzker was critical of the federal government’s COVID-19 response in a cable news appearance Sunday, prompting an angry Twitter reply from President Donald Trump as the number of confirmed cases in Illinois surpassed 1,000 and known virus-related deaths grew to nine.

On CNN’s “State of the Union” Sunday morning, the governor claimed that a lack of coordinated action from Washington has forced states into some of the drastic steps they have taken.

“There is no doubt that the economy is being significantly harmed by the delays that the federal government had during January and February getting going dealing with this,” Pritzker told host Jake Tapper. “That’s why we’ve had to go on stay-at-home orders or keeping kids at home or closing bars and restaurants and so on.”

Pritzker did not announce any new executive action Sunday at a daily COVID-19 briefing in Chicago, but he did call for more blood donations and encouraged volunteerism in response to the pandemic by visiting serve.illinois.gov to be connected with volunteer work. State officials also announced 296 new confirmed COVID-19 cases, bringing the total to 1,049, and three new confirmed deaths related to the virus.

But in his 14th straight daily briefing on the virus’ spread, tensions with the federal government couldn’t be ignored.

He addressed the morning’s TV appearance and ensuing Twitter spat at the end of his COVID-19 remarks, saying “I refuse to spend more time on this than it deserves” before rhetorically telling Trump to “get to work, or get out of the way.”

“One of the things that’s been most heartening here in Illinois is the degree to which Republicans from all over our state have reached out to me to ask how they can help,” Pritzker said. “Even people who have had profound political disagreements with me in the past have been among the first to call or text me asking what they could do to help Illinois in our hour of need.”

While Pritzker said “Illinoisans of all political stripes are doing their part” in addressing the virus, he added “I’m finding it hard to contain my anger with Donald Trump’s response to this national crisis.”

“I have doctors and nurses and first responders begging for masks, equipment, and more tests, and I have a floor full of staff who are working day and night to hunt down the supplies that our health care workers, and our first responders need, and the supplies we know they are going to need,” Pritzker said. “We’re doing that because Donald Trump promised to deliver for all the states weeks ago, and so far has done very little.”

He added, “So apparently the only way to get the president of the United States to pay attention is to go on national television and make noise about it, which I won’t stop doing until we get what we need.”

Pritzker told Tapper that dealing with the federal government has been easier since the Federal Emergency Management Agency took a more prominent role in the fight against COVID-19, but he said the feds fulfilled only “about a quarter” of the state’s original request for personal protective equipment, or PPE, such as masks and gloves. While another shipment is coming, he said, it still represents a fraction of the state’s need.

In turn, he said, states have to try to buy these products on the market, even from other countries, and all states are competing against each other and overpaying for PPE in an effort to keep up with demand.

“This should have been a coordinated effort by the federal government,” Pritzker said. “And the national defense authorization that the president has to essentially push this manufacturing really hasn’t gone into effect in any way, and so yes, we’re competing against each other, we’re competing against other countries. It’s a wild west, I would say, out there.”

Pritzker said the federal government will also have to take decisive economic stimulus action rivaling that of 2008 and 2009, when the federal government spent $152 billion under President George Bush and more than $780 billion under President Barack Obama in response to the financial crisis. The feds on Sunday were debating a stimulus of more than $1.7 trillion.

“State governments are out here, as I said we’re on our own and we’re having to spend quite a lot of money to do things that really are the job of the federal government, but we’re doing it because I’ve got to protect the people here,” Pritzker said. “All across the country our budgets are going to be slammed. Our revenues are going down, no doubt precipitously, and our spending has to go up because we’re saving people’s lives and we’re trying to at least put some money in their pockets.”

Pritzker’s office has suspended a one-week waiting period for people who have lost jobs relating to the virus to collect unemployment and directed the Department of Revenue to defer sales tax payments for bars and restaurants that paid less than $75,000 in sales tax last year. Those businesses will not be charged late payment penalties or interest on payments due in March, April or May.

But Trump, in a Tweet, took aim at Pritzker, other critical governors and the media.

“(JB Pritzker), Governor of Illinois, and a very small group of certain other Governors, together with Fake News @CNN & Concast (MSDNC), shouldn’t be blaming the Federal Government for their own shortcomings. We are there to back you up should you fail, and always will be!” the president posted to Twitter.

That prompted a Twitter response from Pritzker and his comments at the daily briefing later in the afternoon.

“You wasted precious months when you could’ve taken action to protect Americans & Illinoisans. You should be leading a national response instead of throwing tantrums from the back seat. Where were the tests when we needed them? Where’s the PPE? Get off Twitter & do your job,” the governor wrote.

Tapper also asked Pritzker if the response of states which are shutting things down would prove more damaging economically than the virus is damaging medically.

Pritzker said those opinions would not “age well when you look back at it a year from now,” and he said many Illinois businesses have offered employees paid leave and volunteered to aid the state in procuring protective equipment among other tasks.

“I know this is very harmful to small businesses, to all businesses, really, what we’ve had to do across the country, but this is the right thing to do. We’ve got to save lives, now is the moment,” he said.