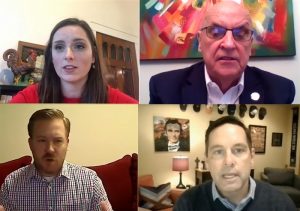 SPRINGFIELD — Republicans in the Illinois General Assembly said Thursday, May 14 that when lawmakers return to the Capitol next week, they intend to push for changes to Gov. J.B. Pritzker’s plan for reopening the economy, a plan he dubbed “Restore Illinois.”

“I have heard members from both caucuses suggest this plan should be vetted and revised,” Senate Minority Leader Bill Brady, of Bloomington, said in a letter to Senate President Don Harmon (D-Oak Park) that he released to the media. “I also believe this should be done in a public setting, which can be undertaken using available technology and social-distancing protocols when we convene in Springfield.”

Pritzker’s plan divides the state into four broad regions and allows for the gradual reopening of businesses and public activities in five phases if they meet and sustain certain benchmarks for infection rates and hospital capacity over a 28-day period. The final, full reopening phase would occur only after a COVID-19 vaccine or treatment is widely available, something that could take one year or more.

As of May 1, all of Illinois was in the second phase of that plan, which allows nonessential retail stores to accept online and telephone orders for pick-up or delivery. It also allows hospitals to resume performing elective surgeries and procedures.

According to the Illinois Department of Public Health, as of Thursday, all four regions of the state, including the northeast region that includes Chicago and Cook County, were on course to move into Phase 3 of the plan by May 29 – the earliest date any region could enter the next phase.

In that phase, manufacturing, offices, retail establishments, barbershops and salons would be able to reopen to the public, with mandatory capacity limits and other safety precautions. Gatherings of 10 or fewer people will be allowed, although face coverings and social-distancing requirements will remain in place.

Only in Phase 4 would restaurants and bars be allowed to reopen with capacity limits. Childcare and schools could resume operations under IDPH guidelines, nonessential travel would be allowed and public gatherings of up to 50 people would be permitted.

But during a video news conference Thursday, a group of House Republicans argued that Pritzker’s plan is still too restrictive and that progress toward a full reopening is too slow.

“One of the problems I have going from 3 to 4 is, when you open up the businesses in 3, you have no childcare for them,” said Rep. Mike Murphy, a Springfield Republican. “I think this whole plan needs to be reevaluated. I don’t see how these businesses can open up in Phase 3 without viable childcare. I also question why restaurants, once again, are part of Phase 4 where in many other states, they’re already opening. We have over 30 counties that border states with restaurants open right now.”

“We’re asking for this to be more targeted, certainly following guidelines to make sure people are safe,” she said. “And we’re leaving out of this conversation the folks who are lumped in with that northeastern group, that they are well under the numbers that they would have to be to move forward into phase three, but because they’re lumped in with Cook County, they are being artificially held back when that’s not necessary.”

When Pritzker first announced the Restore Illinois plan on May 5, he said the four regions were drawn around the state’s 11 emergency medical service regions. He said the groupings were based on each region’s hospital capacity and ability to coordinate emergency responses.

Asked again about the design of the four regions, Pritzker said during his daily briefing in Chicago on Thursday that a more narrowly-tailored regional system would not work.

Meanwhile, county sheriffs and other local officials in parts of the state have begun saying they will no longer enforce Pritzker’s orders.

Pritzker so far has ruled out the possibility of using the Illinois State Police or other law enforcement agencies to enforce his orders, but he has suggested that local governments that refuse to enforce the orders risk losing state and federal funding in the future and that bars, restaurants and other businesses that defy the order could have their licenses revoked.

He also had strong words for the county sheriffs and other local officials who have said they will not enforce the orders.

“I would suggest that towns and leaders, elected leaders, do your job. Lead,” he said. “Be the person that they elected, who is supposed to be protecting your community. Don’t fall prey to the rhetoric that’s out there that says, ‘Oh, let’s just open up. This virus doesn’t affect anybody like me.’ You’re wrong.”

That prompted a sharp reply from the Illinois Sheriffs Association, which issued a statement Thursday blasting Pritzker’s remarks.

“Illinois Sheriffs have been elected by their local citizens to keep their communities safe, a trust that every sheriff and sworn law enforcement officer holds dear,” the statement read. “It is outrageous that the Governor is threatening retaliation against these leaders and the men and women of their offices. He is insulting heroic police officers, corrections officers and local voters.”