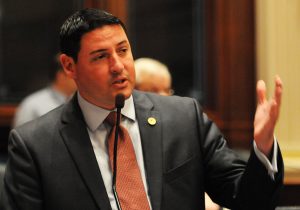 Rep. John Cabello, R-Machesney Park, on Wednesday, April 29 filed a lawsuit in Winnebago County on behalf of himself and “all citizens of the state,” alleging Gov. JB Pritzker overstepped his authority in ordering Illinoisans to stay at home to prevent the spread of the novel coronavirus. (Credit: johncabello.org)

SPRINGFIELD — A second Republican state representative on Wednesday, April 29 filed a lawsuit against Gov. J.B. Pritzker alleging he overstepped his authority in ordering Illinoisans to stay at home to prevent the spread of the novel coronavirus.

The outcome of Machesney Park Rep. John Cabello’s case could affect all state residents, as Cabello filed the suit in Winnebago County on behalf of himself and “all citizens of the state of Illinois similarly situated.”

Illinoisans’ right to “free movement” — to leave their homes and shop at a local business, for example — were “arbitrarily stripped away from them” by Pritzker’s implementation of the stay-at-home restriction, Cabello alleges.

That order, initially instituted on March 20 and extended through the end of May, “could continue into perpetuity as (Pritzker) solely determines, all without due process of law,” according to the court filing.

“No one has that authority — nobody, not the governor, not the president,” Cabello’s attorney, Thomas DeVore, said Wednesday in a phone interview. “That is the stuff of kings centuries ago. It is unconstitutional.”

DeVore is also representing Rep. Darren Bailey, a Republican from Xenia, in a similar case. On Monday, a Clay County Circuit Court judge ruled in favor of Bailey and released him from the governor’s stay-at-home orders.

Cabello’s case differs from Bailey’s in that it alleges the Illinois Department of Public Health has “supreme authority” to close businesses and put residents under quarantine or isolation.

According to the statute creating the department, officials must either have an Illinoisan’s consent when doing so, or obtain a court order. The burden of proof is great — among other things, the department would need to prove to a judge that the community’s health is “significantly endangered” by the person it wants to quarantine.

DeVore said the procedure outlined by that statute is “the law of the land” and what should be governing any quarantines.

“… Pritzker has perverted the emergency provisions of the (Illinois Emergency Management Act) in an effort to rip the sacred responsibility of the health and lives of the people away from where the Legislature placed it, being local control of county health departments of the (Illinois Department of Public Health), and in doing so he took complete control of the free movement of every citizen within the state of Illinois,” according to the lawsuit.

“Even if well intentioned by Pritzker, his actions as governor have left every citizen of this state completely devoid of any procedural due process rights to protect their liberty…,” the document continues.

In the court filing, DeVore also takes issue with the governor’s disaster proclamations including a 30-day “arbitrarily placed” time frame.

The Illinois Emergency Management Act specifies a governor has emergency authority during a disaster for 30 days, but DeVore said it does not specify that a disaster must include an end date.

He said he believes Pritzker does not have the authority to issue successive disaster proclamations, and he suggested the Legislature should use those 30 days to determine what actions it should take to protect public health.

“They’re playing games with this type of language,” DeVore said. “The governor’s people should appreciate there’s a lot of smart people in this state who can see this for what it’s worth.”