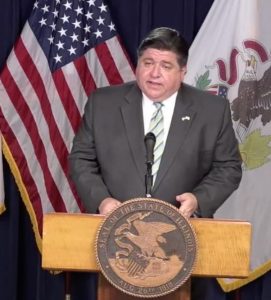 Gov. J.B. Pritzker speaks at a press briefing in Chicago on July 15. (dph.illinois.gov)

SPRINGFIELD — The Illinois Department of Public Health announced another 1,076 confirmed cases of COVID-19 in Illinois on Tuesday, July 28 as the rolling, seven-day test positivity rate remained at 3.8 percent.

IDPH also reported that the rolling positivity rate in Region 4 of the state’s COVID-19 mitigation plan — which includes the Metro East area on the Missouri border — reached 7.8 percent as of July 25, or slightly less than the 8 percent mark that, if sustained for three days, would necessitate state intervention to mitigate the virus’s spread.

When Gov. J.B. Pritzker laid out the state’s coronavirus mitigation plan on July 15, he said if a region has three consecutive days averaging greater than an 8 percent positivity rate on tests conducted, it would be a “failsafe” metric requiring immediate action.

Mitigation efforts would occur in three tiers, he said at the time, and would include rolling back some sectors of the economy to how they looked in previous phases of the state’s COVID-19 reopening plan.

Additional meeting size restrictions would also be considered, along with remote work guidance or safety requirements for offices.

All of the other regions ranged from 3.9 percent in western Illinois to 5.8 percent in Will and Kankakee counties. Six of the 11 regions had seen their positivity rate tick upward for at least seven of the past 10 days — another warning level, according to the state’s mitigation plan. None of them, however, had seen the necessary hospitalization increases to warrant state action for rolling back reopening efforts.

The new cases reported by IDPH were among 28,331 test results completed over the previous 24 hours, making for a one-day statewide positivity rate of 3.8 percent. 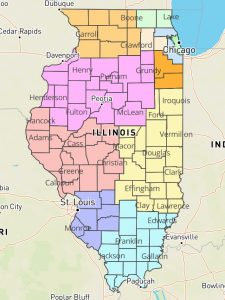 Map shows the state’s 11 regions for reopening and recovery of COVID-19. (Courtesy of IDPH)

The department also reported another 30 COVID-19-related deaths, bringing the total number of fatalities since the pandemic first reached Illinois to 7,446 among 173,731 confirmed cases throughout the state’s 102 counties.

The number of hospital beds in use by COVID-19 patients remains relatively level near pandemic lows. At the end of Monday, 1,383 people in Illinois were hospitalized with COVID-19, including 329 in intensive care unit beds and 128 on ventilators.

Meanwhile, Illinois Attorney General Kwame Raoul has joined a coalition of attorneys general across the U.S. looking to return COVID-19 data collection to the U.S. Centers for Disease Control and Prevention — not solely the U.S. Secretary of Health and Human Services.

In a letter sent Tuesday to U.S. DHHS Secretary Alex Azar, Raoul and 21 other attorneys general urged the department to “restore the CDC to its rightful role as the primary authority over and source of information about the nation’s public health data.”

They look to overturn a directive displacing the CDC with HHS, claiming the directive “imperils public health and dangerously undermines transparency during the COVID-19 pandemic.”

“The CDC has nearly 75 years of experience in mitigating the spread of diseases and illnesses,” Raoul said in a news release. “Removing the CDC from the system for reporting hospital COVID-19 data will significantly inhibit its ability to battle this pandemic which has sickened and taken the lives of thousands throughout the United States, including more than 7,400 in Illinois.”