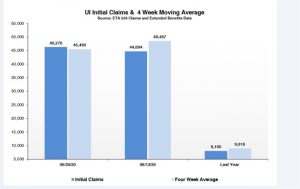 He also said each state agency and department “has a kind of a reopen plan that either has been developed or is being developed,” but did not say when IDES might start opening facilities for claimants having trouble getting through to a department representative.

“It sort of depends on the locations, it depends upon the number of people that would normally be in that space and so on. We have health guidance for people who work at IDES, just like we do any other business or that we’re trying to reopen,” he said at a news conference Tuesday.

In a statement Monday, IDES also the department has set up a virtual call center that has grown to more than 560, more than doubling its capacity since the beginning of this pandemic.

That has allowed the department to handle more than 50,000 additional unemployment claims and questions that have come through the call center between May 5 and June 4, according to the statement.

An IDES spokesperson encouraged claimants to use the department’s website — which had its capacity increased early during the pandemic — to file claims and leave the phone lines for those who are otherwise unable to file a claim online.

“While we understand that claimants may be continuing to experience unique issues with their claims that require claims rep intervention, our upgrades have allowed us to process more than 1.4 million claims since March 1 and pay out more than $7 billion in benefits,” the spokesperson said in a statement in response to questions of how a claimant can best get through to the department. “We understand that there are many cases where a claimant needs to speak to a representative to resolve an issue or make a change, which is why we are continuing to work to increase capacity.”

Pritzker said calls are also being separated by those who are seeking help in applying through online portals and those who would need assistance requiring them to provide private information. That frees up lines for those having unique problems, he said.

He added the administration has “tried to train” elected officials and their staff on “how they can assist people with their applications in the event that they’re having trouble getting through on the phone.”

IDES also announced last week it will borrow funds from the federal government to “continue to meet unemployment benefit payment obligations to claimants who have lost work as the COVID-19 pandemic continues.”

A press release from the department said the state joined eight others which have either been approved to borrow or have begun to borrow money from the feds to continue to fulfill unemployment benefit payments.

“Through the end of June, IDES anticipates borrowing approximately $300 million from the federal government through a long existing mechanism set up to enable states to continue to fund essential benefit payments when demand increases unexpectedly,” the department said in a news release. “IDES has been approved to borrow up to $3.8 billion through September 2020.  During the 2008 Great Recession, the department borrowed $1.4 billion, and it was repaid in five years through a joint funding agreement with Illinois’ business community.”

The department said the Unemployment Trust Fund is 100 percent funded by employer taxes, and the ability to pay back what is borrowed “has historically come in the form of an agreed rate change in employer taxes,” but IDES and the Pritzker administration are exploring other federal options, including calling for a federal stimulus aimed at replenishing unemployment reserves.

IDES also announced Thursday the number of nonfarm jobs decreased in all fourteen Illinois metropolitan areas since last year, with six metro areas at record low payrolls, according to preliminary data released today by the U.S. Bureau of Labor Statistics and IDES.