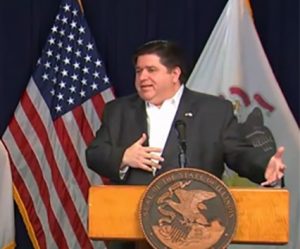 “The overwhelming majority of long-term care facilities in Illinois are privately run,” Gov. J.B. Pritzker said during his daily COVID-19 news conference Thursday in Chicago. “In response to the COVID-19 crisis, some of those facilities have acted proactively, some only reactively.”

Pritzker said of roughly 1,100 long-term care facilities that care for elderly Illinoisans, 900 have “been connected with directly or in person” by the Illinois Department of Public Health office of health care regulation, its consultants or its teams of nurses.

Pritzker said the state now has two groups of nurses “fanning out to long-term care facilities around the state.” That includes a group of 200 IDPH nurses who are conducting “focused COVID-19 infectious disease control surveys to monitor compliance,” or conducting swab testing and training staff to do the testing. That group also reviews each facility’s personal protective equipment use and hygiene practices.

Another group of 100 contract nurses monitors for infection prevention and control and provides “additional testing systems.”

Others work with their local hospitals and health centers to source and conduct tests, he said.

The state has also distributed about 45,000 testing kits, in 200 shipments, to 170 nursing homes, and personal protective equipment has been delivered to every nursing home in the state as well.

Some homes, however, have even denied receiving free testing equipment from the state. 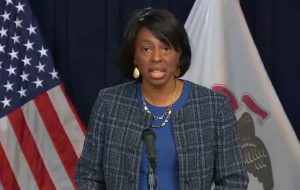 : Dr. Ngozi Ezike, diretor of the Illinois Department of Public Health, announces during a news conference Thursday, May 29 in Chicago that there were 1,527 new confirmed cases of COVID-19 recorded in the state the past day along with 104 additional deaths. (Credit: blueroomstream.com)

“And even as we work to ramp up regular testing of all our long-term care residents and staff, my administration has received some pushback from owners and industry representatives, making it difficult to secure compliance across the board,” Pritzker said.

The IDPH’s new emergency rule will require long-term care facilities to report to public health officials the number of residents and staff tested, along with the number of positive and negative test results.

The facility must also make sure a copy of the facility’s infection control policies and procedures is provided to residents and their families, along with IDPH or local health departments, upon request.

The governor said the emergency rule enforces existing policies, and those not complying will be found in violation of the rules and will be subject to fines or other licensing penalties through existing IDPH authority.

The announcement came as the state reported another 104 deaths from the virus in the previous 24 hours, bringing the total to 5,186 fatalities since the pandemic first arrived.

There were another 1,527 cases reported Thursday among 25,993 for a positivity rate of 5.8 percent, bringing the preliminary seven-day statewide positivity rate from May 21-27 to 8.3 percent.

COVID-19 hospitalization measures continue to improve as well, IDPH Director Dr. Ngozi Ezike said, as there were 3,649 people hospitalized with the disease caused by the virus as of midnight Thursday. Of those, 1,009 were in intensive care unit beds and 576 were on ventilators. All of those numbers were trending downward.

That’s good news as the state readies to enter the third phase of the governor’s Restore Illinois reopening plan Friday which will allow for more businesses to open.

Several activities will reopen under specific guidance from the state, including outdoor dining, outdoor recreation, manufacturing, retail, personal care services and offices. Those guidelines are available at Illinois.gov/businessguidelines, and they include provisions for youth sports, Pritzker said.

He also noted horse racing will return to Illinois tracks under the next phase.

“The Department of Agriculture has worked with the IDPH, with the Illinois Racing Board and the industry leaders to develop guidelines for racing, allowing those whose livelihoods depend on these races to get back to work, and allowing spectators to work from home and place wagers online and over the phone,” he said.

As the state enters the next phase, which allows gatherings of up to 10 people, the same metrics will be used to see if each of the four regions in the Restore Illinois plan can enter phase 4 after 28 days. Those metrics include 14 percent hospital surge capacity, a decrease or steadiness in hospitalization rate for 28 days and a positivity rate of 20 percent or less for those tested over a 14-day period.

Whether the state moves forward or backward will depend on the numbers.

“It’s possible that if we have a surge, a spike and we need to quell that spike, we might, potentially, have to move backward in the phases,” he said. “That’s not something any of us wants to do, but certainly it wouldn’t allow a region of the state to move forward if it wasn’t meeting the metrics that we’ve set.”