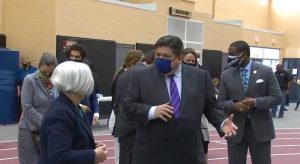 SPRINGFIELD – The statewide seven-day rolling positivity rate in Illinois declined to 3.3 percent Friday, Feb. 5 as the state reached a single-day vaccination record with nearly 75,000 doses administered the day prior.

Approximately 74,965 doses of the Pfizer-BioNTech and Moderna COVID-19 vaccines were reported administered across the state on Thursday, surpassing the previous one-day record of 65,166 doses administered on Feb. 2.

Illinois has received more than 2.1 million doses of the COVID-19 vaccine. A total of 1.6 million doses of vaccine have been delivered to providers in Illinois, with an additional 496,100 doses allocated to the federal government’s Pharmacy Partnership program for long-term care residents.

While some lawmakers continue to criticize Pritzker for the pace of vaccine rollout in the state, he said the state is the sixth most populous in the nation and was the sixth in the nation to surpass one million doses administered.

“But remember, there isn’t enough vaccine being delivered to us by the vaccine manufacturers that are providing it right now,” Pritzker said. “It will be weeks before all of those who are eligible will be able to get it.”

Yet, Pritzker said he is hopeful as the pharmaceutical giant Johnson and Johnson announced Thursday that it has submitted its single-dose COVID-19 vaccine to the U.S. Food and Drug Administration for emergency use authorization.

FDA officials announced that outside experts are set to discuss the vaccine at a public meeting on Feb. 26, the Washington Post reported.

In its clinical trials, Pritzker said, the company reported an 85 percent effectiveness rate against severe illness and 100 percent protection against death.

“It’s also a one-dose vaccine which makes it easier to administer, people don’t have to come back for a second appointment and that’s very important,” Pritzker said. “I hope that we’ll see this third vaccine in the supply pipeline not too many weeks from now.”

The Illinois Department of Public Health reported 3,660 new confirmed and probable cases of COVID-19 Friday out of 105,085 test results, along with an additional 83 deaths in the state.

There has been a total of 1.14 million cases from a total of 16.4 million test results reported and 19,526 deaths across Illinois’ 102 counties since the pandemic began.

As of Thursday night, 2,318 COVID-19 patients were reported to be in the hospital, with 491 in intensive care unit beds and 254 patients on ventilators.

All 11 mitigation regions of the state are under Phase 4 of the Restore Illinois plan, where youth sports and indoor dining have resumed with loosened restrictions.

Lawsuits over indoor dining ban proceed even as all regions reopen