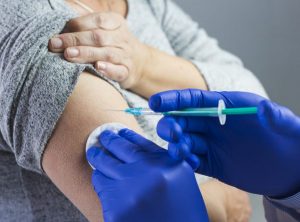 SPRINGFIELD – State officials have been notified that winter weather across much of the U.S. is causing delays in the delivery of COVID-19 vaccine shipments, according to a Tuesday, Feb. 16 release.

“To help offset delayed vaccine deliveries, the State of Illinois proactively ordered vaccine to be delivered to its Strategic National Stockpile Receipt, Store, and Stage site in anticipation of adverse weather,” according to a news release.

Those vaccine doses from the stockpile site will be distributed to providers as weather permits in the coming days, according to the release, which said the Illinois Department of Public Health has been in close contact with providers about the federal delays.

The U.S. Department of Health and Human Services and Operation Warp Speed are projecting delays to the supply chain due to weather, according to the state, which may impact deliveries for Tuesday and the rest of the week.

The state administered 40,354 COVID-19 vaccinations statewide Monday. As of Tuesday, the state has issued over 1.8 million doses, with 3.3 percent of the state’s population being fully vaccinated.

The state has used over 74 percent of the 2.4 million does allocated by the federal government.

Eleven percent of the state’s population has received at least one dose of the COVID-19 vaccine, moving Illinois to 23rd in vaccine distribution nationally according to the New York Times vaccination database.

The state’s seven-day rolling average for daily vaccines administered stood at 63,772 Tuesday, up from 55,000 doses per day a week ago.

The state announced on Monday, Feb. 15 that it would begin to focus this week on issuing second doses to residents who have already had their first dose under Phase 1B.

According to a Monday news release prior to notification of weather delays, state officials were projecting that weekly vaccine shipments from the federal government would hold steady for the rest of the month before increasing in early March.

Last week, Gov. J.B. Pritzker announced that the state will expand vaccine eligibility under Phase 1B of the state’s distribution plan to people aged 16 and older with underlying health issues by Feb. 25.

Pritzker said the decision came as the result of increased vaccine production at the federal level, as well as the pending approval of a new single-dose vaccine from Johnson & Johnson that could receive approval from the U.S. Food and Drug Administration in a hearing on Feb. 26.

Public health officials told the committee that mass vaccination efforts could begin once the state reaches 900,000 dose deliveries per week.

The state will also begin distribution pilot programs at some state prison locations this week. Inmates and prison workers are eligible to receive the vaccine under Phase 1B, along with frontline non-health care essential workers and residents aged 65 and older.

An estimated 3.2 million residents are eligible to receive the vaccine under Phase 1B. Eligible residents can search for a vaccination site closest to them and make an appointment at coronavirus.illinois.gov.

The statewide positivity rate stood at 2.8 percent Tuesday, the second straight day that number was below three percent and the lowest mark since July 19. Public health officials reported 1,348 new confirmed and probable cases of COVID-19 out of 46,630 test results Tuesday.

The positivity rate has not increased more than a tenth of a percentage point since early January, and has continued on a downward trend since then.

Public health officials announced 32 deaths due to COVID-19 Monday, bringing the state’s death toll to 20,034 since the pandemic began.

Life after getting the COVID-19 vaccine