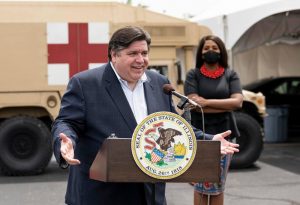 Gov. J.B. Pritzker speaks at the federally funded COVID-19 testing site in the Peoria Civic Center parking lot as state Rep. Jehan Gordon-Booth, D-Peoria, looks on. The state has taken over the facility, as well as one in Harwood Heights, after federal funding for the sites was pulled. (Facebook photo)

The state of Illinois has taken over two COVID-19 testing facilities after funding was pulled from the federally run sites.

Located in Peoria and Harwood Heights, the sites will now be under state control.

“The state will continue to operate those sites and the public should not notice any changes,” said Melaney Arnold, spokesperson for the Illinois Department of Public Health.

The state had requested an extension for continued federal support at the two Illinois community-based testing sites that the federal government was running. However, the request was denied.

“The state of Illinois is committed to increasing testing and will continue to support these sites,” another IDPH spokesperson said.