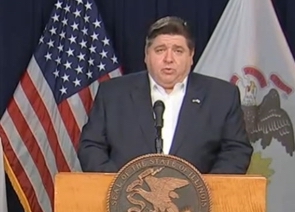 SPRINGFIELD – Illinois continues to increase its COVID-19 testing capacity, setting a one-day record on Friday, May 8 with more than 20,000 tests completed in state during the previous 24 hours.

The Illinois Department of Public Health reported on Friday that 20,671 tests for COVID-19 were completed the previous day, bringing the state’s total to 399,741, which is about 3 percent of Illinois’ population.

“Illinois has made important and measurable progress in growing our daily test numbers, today for the first time exceeding 20,000 tests,” Gov. J.B. Pritzker said at his daily COVID-19 briefing in Chicago.

The governor said Illinois now has 244 public testing sites, up from 177 just a week ago. Those sites include seven state-run drive-thru sites, “which are now collectively taking over 3,000 specimens per day.” He said three new drive-thru sites will be set up next week.

Pritzker also said as of Wednesday Illinois ranked second among the 10 most populous states in tests completed per capita in the past week, and it ranked fifth out of all 50 states in total tests completed since COVID-19 came to America. 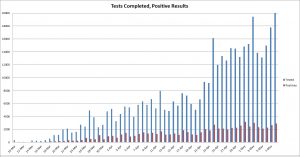 “Even if we’re one of the best states in the nation on testing, we know it’s not enough to be where we need to be on a longer timeframe,” the governor said.

Pritzker said the state is expecting a shipment of 620,000 testing swabs and 465,000 vials of viral transport medium, or VTM, to arrive from the federal government by the end of May. He said the first shipment was initially due the first week of May but is now expected this Sunday.  Pritzker, often a critic of the federal response, said the materials are “an important part of our further testing growth.”

“Testing is fundamental to our ability to reopen the economy while controlling the spread of the virus,” he said. “That’s what it takes to keep the public safe.”

Accompanying Pritzker at Friday’s briefing was Dr. Aaron Rossi, CEO of Reditus Laboratories in Pekin, which has been heavily involved in the ramping up of COVID-19 testing in Illinois.

Reditus operates a 24/7 private lab processing up to 4,000 coronavirus tests from drive-thru locations as well as Heartland Health in Peoria. Rossi said the company has hired 75 employees in the last few weeks to help with testing.

“Our goal is to continue to support the governor to reopen the state by providing access to testing to the best of our efforts, and to get life back to what we remembered before and trying to open the state up as quickly as possible,” Rossi said.

IDPH on Friday also reported 2,887 new cases of COVID-19, making for a 14-percent positivity rate for the tests completed in the past 24 hours – the lowest recorded since March.

One of the contingencies for a region to move to the next phase of the state’s reopening plan is for it to have a positivity rate below 20 percent for 14 straight days.

While Friday was the first time that four consecutive days have seen more than 100 deaths, IDPH Director Dr. Ngozi Ezike said that does not necessarily indicate a trend.

“If you look at our averages per week, we definitely have hit a peak of deaths, maybe two weeks, maybe a week ago,” she said at the briefing. “So I don’t think overall this is one of our heaviest weeks, even though there may have been a cluster of deaths that were reported that seem high four days in a row.”

Pope County, in far-southern Illinois, reported its first case of the disease on Friday. Only four of Illinois’ 102 counties have yet to report a case.

Friday was the 61st consecutive COVID-19 briefing for state leaders. Saturday will end that streak, as the governor announced Thursday that officials will no longer address the public on weekends. Instead, the health department will just release its daily statistics.