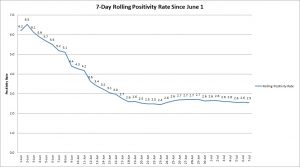 SPRINGFIELD – The state’s rolling seven-day COVID-19 test positivity rate ticked downward to 2.5 percent Tuesday, July 7 as the state remained among the lowest in the Midwest in the metric.

That number was driven downward by one-tenth of a percent due to a 2.2 percent one-day positivity rate for tests reported in the previous 24 hours. There were 597 new COVID-19 cases reported by the Illinois Department of Public Health on Tuesday among 26,994 test results.

There were also another 37 reported COVID-19-related deaths – a drastic spike from Sunday’s and Monday’s total of six each that fit an IDPH pattern of low weekend numbers ahead of a higher Tuesday result.

That brought the total number of deaths related to the virus to 7,063 among 148,452 confirmed cases since the pandemic arrived in Illinois. There have been more than 1.8 million tests completed in the state.

Hospitalization metrics remained near their pandemic lows at the end of Monday as well. As of 11:59 p.m. Monday, there were 1,385 people hospitalized with COVID-19, the fourth straight day that number was below 1,400 as it decreased slightly from the day before.

Of those patients, 320 were in intensive care unit beds – the second-lowest one-day total since the state began reporting the data daily on April 12. There were 153 COVID-19 patients on ventilators, an increase of two from the day prior when that metric saw its single-day low.

At least one confirmed case of COVID-19 has now been reported in all of 102 Illinois counties, as Scott County reported its first case over the holiday weekend. It’s the first positive case among 547 tested, according to IDPH data.