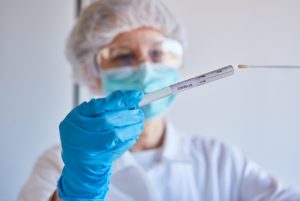 Over the past week, 44 individuals testing positive for COVID-19 were reported by the Illinois Department of Public Health to have died

SPRINGFIELD – Hospitalizations for COVID-19 jumped by more than 13 percent from Sunday to Monday night, Aug. 1-2, while intensive care bed usage jumped 15 percent as the delta variant of the virus continued to cause a surge nationwide.

According to the Illinois Department of Public Health, 1,107 individuals with COVID-19-like illness were hospitalized as of Monday night, an increase of 130 from the night before. ICU bed usage for COVID-19 jumped to 243 from 212, and ventilators jumped 18 percent, to 103 from 84.

While those numbers were below previous spikes in disease spread, they represented a rapid increase from recent pandemic lows.

Ventilators were up nearly 4 times from the 28 in use by COVID-19 patients as of a July 15 pandemic low. Hospitalizations were three times more than their July 4 pandemic low of 380, while ICU bed usage increased by three times since that date as well.

The one-day hospitalization totals were the highest they’ve been since late May and early June.

Capitol News Illinois reached out to the Illinois Department of Public Health as to what percentage of individuals who had contracted, been hospitalized or died of COVID-19 were unvaccinated during the June and July surge, but did not receive a response as of this publication.

WCIA-TV Champaign’s Mark Maxwell reported last week that IDPH said 87 percent of the June COVID-19 cases and hospitalizations were in unvaccinated individuals, along with 92 percent of COVID-19-related deaths.

Approximately 51 percent of the state’s population is fully vaccinated, or about 6.5 million people. The vaccination pace has accelerated amid the surge, with 28,250 vaccine doses administered daily on average over the past seven days. That’s up from a pace of 16,423 on July 9, but down from a pace of more than 130,000 in April.

Over the past week, 44 individuals testing positive for COVID-19 were reported to have died by IDPH, bringing the state’s death toll to 23,458, with another 2,482 probable COVID-19 deaths reported.

But it wasn’t just southern Illinois that had scarcities, as Region 1, in the northwest corner of the state, had 18 percent of ICU beds, or just 32 of 181, available.

The state’s rolling seven-day average case positivity rate increased to 4.4 percent, matching the mid-April peak of the most recent virus surge. Since June 2020, the highest positivity rate recorded was 13.2 percent, logged in November.