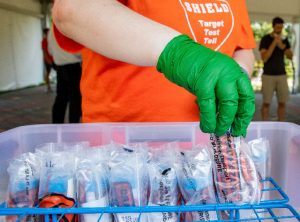 The University of Illinois System received Emergency Use Authorization from the U.S. Food and Drug Administration on Monday, March 1 for its saliva-based COVID-19 test, as the statewide seven-day rolling positivity rate reached 2.4 percent.

The FDA approval allows for the covidSHIELD test to expand beyond the U of I System. The saliva-based COVID-19 test has been administered more than 1.5 million times at universities in Urbana-Champaign, Chicago and Springfield since it launched in 2020, according to a news release.

Gov. J.B. Pritzker says he will be dedicating $20 million in federal CARES Act funding to provide one million of the saliva-based tests to Illinois’ 12 public universities and 48 community colleges.

According to Pritzker, widespread testing remains critical to combating the ongoing pandemic.  An agreement between the Illinois Department of Public Health and the U of I System allows for federal funds to be put toward providing the tests.

“My administration has been proud to work hand in hand with U of I since the earliest days of this development, which has had an enormously positive effect on keeping COVID-19 at bay in the U of I System, and we’re wasting no time in deploying this technology throughout the state,” Pritzker said in a news release.

The testing process was developed by a team of researchers at UIUC.

The samples are tested at a covidSHIELD lab and individuals receive results within 24 hours. The test uses a genetic material contained in SARS-CoV-2 virus to determine if the virus is present or not in the salvia.

“The University of Illinois has been a national leader in innovation for decades, and the campus’ groundbreaking work to develop rapid, saliva-based COVID-19 testing is but the latest example of that tradition,” Pritzker said.

This comes as the FDA also granted Emergency Use Authorization to a third COVID-19 vaccine, developed by Johnson & Johnson, over the weekend.

Illinois has received more than 3 million doses of the Pfizer-BioNTech and Moderna COVID-19 vaccines as of Monday. A total of 2.7 million doses have been delivered to providers in the state, with an additional 443,700 doses allocated to the federal government’s Pharmacy Partnership Program for long-term care facilities.

On Sunday, 50,897 doses of the vaccine were administered in a single day. A total of 2.7 million vaccines have been administered across the state, including 319,393 for long-term care facilities, as of Sunday night.

About 6.5 percent of the state’s population has received two doses of the COVID-19 vaccine.

The seven-day rolling average of vaccines administered daily is 77,876 doses.

IDPH is currently reporting a total of 1,187,839 cases of more than 18 million total test results reported, including 20,536 total virus-related deaths since the pandemic started.