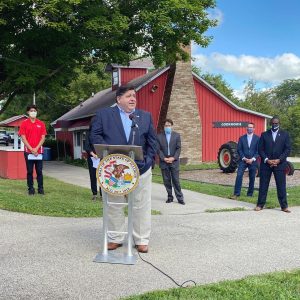 Gov. J.B. Pritzker speaks during a public event Thursday, July 16 in Rockford to tout the state’s Summer Youth Employment Program and its impact on the Rockford Park District. (Photo courtesy of @GovPritzker on Twitter)

SPRINGFIELD — Illinois saw 37,626 new unemployment claims for the week ending July 11, a decrease of more than 1,000 from the previous week as continued claims numbered 663,399.

That represented a 0.7 percentage point decrease to the state unemployment rate, which was 14.6 percent, according to the Illinois Department of Employment Security.

U.S. Department of Labor data shows there were 4,061 fewer continued claims for the week ending July 12 than there were the previous week.

Nonfarm payrolls added 142,800 jobs in June based on preliminary data provided by the U.S. Bureau of Labor Statistics.

In a news release, state officials expressed optimism that the positive employment trends could continue and accelerate as the state tries to navigate a path toward virus mitigation and economic growth.

While unemployment is decreasing during the state’s measured reopening period from COVID-19 related shutdowns, the virus remains present, and Gov. J.B. Pritzker laid out actions this week that could be taken if there is a sustained increase in new cases.

For now, virus positivity rates and hospitalizations for COVID-19 appear to have leveled near their pandemic lows.

As of Wednesday night, statewide hospitalization metrics remained near their pandemic lows. There were 1,434 patients hospitalized with COVID-19.  Of those, 311 patients were in intensive care units and 127 were on ventilators. Those all represented decreases from the day prior.

When the governor on July 15 outlined a plan separating the state into 11 coronavirus mitigation regions — up from four in the initial reopening plan — he also took questions about continued difficulties callers face when trying to access IDES call centers.

He once again reiterated that those who are able to file an unemployment benefits application online should do so, and said that problems with unemployment systems are widespread throughout the U.S.

The governor also addressed the callback only system which was put in place to prevent long wait times and to allow applicants to dial a number, then wait to be called back by an IDES employee.

“This is an enormous challenge. IDES, you know, was overwhelmed. There’s just no doubt about it,” he said, noting that the department has added 500 employees to call centers. “…The challenge has been, even with additional people answering phones, that in order for them to deal with your specific case, they have to meet a federal requirement that is about 10 months of training. We haven’t even been in this pandemic for… more than five months.”

He said the state has been separating calls that require such expertise from ones that do not. Still, he said, due to the sheer volume of calls coming into the agency, “it would be impossible to have enough people to be able to answer every call as it comes in,” which is why the callback system was implemented.

While Pritzker said there is “a lot of progress that needs to be made,” he said new IDES Director Kristin Richards, who joined the department last week after serving as chief of staff for Senate President Don Harmon, D-Oak Park, and his predecessor, is “already providing great ideas for us.”

At a Thursday news conference in Rockford, the governor also took questions on the immediate future of K-12 education for the fall term in Illinois. He reiterated that masks and social distancing are required in any district, otherwise individual districts and schools will have leeway for developing plans.

He also warned, “This fall is not going to be like any other fall from a school perspective that we’ve seen.”

“We’ve left it up to school districts to make these decisions because every one of them is different, their capability to do that is different,” he said of the potential of opening schools early and having classes outside. “What we want to make sure is that there are options here. So we put a lot of money this summer and, frankly, even in the spring to building up our E-learning resources. …It’s not nearly as good as in-person. …I think the experts have determined that. But having options is hugely important, particularly in this very uncertain world of a novel coronavirus.”