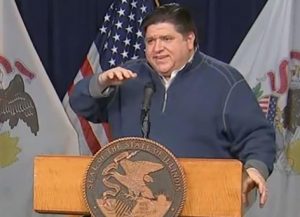 Gov. J.B. Pritzker takes questions on the stay-at-home order and other facets of his COVID-19 response Wednesday in Chicago. (Credit:BlueRoomStream)

The Illinois Department of Public Health reported 2,049 new cases Wednesday and 98 additional deaths. Those new cases coincided with 9,349 test results reported – the largest single-day output by nearly 2,000. Pritzker has said previously, however, that the number of tests reported daily fluctuates as private labs, state labs and hospitals all report on different schedules.

“That’s the largest number yet, so that’s why you see a larger positive testing result,” he said at his daily COVID-19 briefing in Chicago.

Officials have set a goal of 10,000 tests per day, which they say will give them the most accurate picture of COVID-19’s spread in Illinois.

“Testing will help us know just how widespread the virus is and what communities are being impacted most and where we need to target our responses,” IDPH Director Dr. Ngozi Ezike said Wednesday at the briefing. “We already know some of this information through the testing that we have been able to do, but more is yet needed.”

Ezike said that as of Monday the number of people hospitalized in Illinois with COVID-19 was 4,665, of which 1,220 are in intensive care, and 747 of those patients are on ventilators.

She also said that more than 2,500 health workers have contracted COVID-19, including “potentially eight deaths” – the first time the state has released such numbers. She added that “health workers” can include people from hospital nurses to front desk attendants to nursing home workers.

Pritzker on Wednesday announced two new state-run drive-thru testing sites in northern Illinois, where people can drive up to a medical professional, get swabbed for the disease and drive away.

The new sites are at the Chicago Premium Outlets shopping mall in Aurora and the University of Illinois College of Medicine campus in Rockford. The Aurora site, which opened Wednesday, can perform 600 tests a day, while the Rockford site, which opens Friday, will be able to test 500 a day, Pritzker said.

Along with the three drive-thru facilities already open in Markham, Harwood Heights and Bloomington, Pritzker expects the five combined sites to perform as many as 2,900 tests a day.

“More widespread testing is a key goal for combating COVID-19,” Pritzker said. “It’s a vital feature of our long-term path to building a new normal.”

Drive-thru testing is open to any person with COVID-19 symptoms who wants a test, even if he or she does not have a doctor’s order. Although testing is free, people are asked to show photo identification. They should also expect significant wait times.

Along with drive-thru sites, testing is available at many hospitals, health clinics, urgent care facilities and federally qualified health centers. A full list can be found here: https://coronavirus.illinois.gov/s/testing-sites.

No decision on stay-at-home order

Pritzker has yet to announce a decision on extending the stay-at-home order that expires at the end of April, nor what changes might come with an extension.

Pritzker said he wants to “find the right balances” to make sure the costs of staying home do not outweigh the costs of reopening the state.

“I understand that it’s challenging for people. There’s a mental health cost in addition to a financial cost for everybody,” he said. “I think we’re all recognizing that normal is going look a little bit different going forward until there’s a vaccine.”

Missouri Gov. Mike Parson is currently planning for a phased-in reopening on May 4, which would make his state one of just a handful to try such a move. Pritzker said he has not talked with Parson about his plan.

Pritzker is instead coordinating Illinois’ strategy with the governors of Ohio, Kentucky, Indiana, Michigan, Wisconsin and Minnesota. Pritzker said that Parson and Iowa Gov. Kim Reynolds declined to join that pact.

“Remember that one of the biggest reasons that we closed state parks originally was the state workers who work there,” he said. “They have to work in close proximity, even though you might think of a state park as being quite large.”

“We’ve talked a lot about how we might make changes that would allow people to use state parks,” he said.