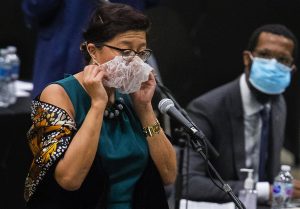 Rep. Karina Villa, D-West Chicago, wears a thin translucent mask over her face as she discusses an unnamed employer that told workers such a mask would offer protection from COVID-19 during debate at the spring legislative session Friday, May 22 at the Bank of Springfield Center in Springfield. [Pool photo by Ted Schurter/The State Journal-Register]

SPRINGFIELD — A compromise bill between business and labor which deals with COVID-19 and workers’ compensation passed the House on Friday, May 22 with broad bipartisan support and will head to the governor.

House Bill 2455 was carried by Democrats Linda Holmes of Aurora in the Senate and Jay Hoffman of Swansea in the House. Much of the floor debate on the measure centered on the bipartisan negotiations which included business and labor interests.

“This is an agreement between business and labor that ensures better protections for employees and clear, consistent guidelines to ensure employers know how to operate safely,” Holmes said. “I’m grateful for the spirit of cooperation that allowed us to work quickly and decisively to pass this plan.”

The bill also ensures Illinois continues to qualify for federal relief by extending unemployment benefits, waiving a one-week unemployment insurance waiting period and expanding eligibility for unemployment to non-instructional education employees, such as lunch workers and teachers’ aides, according to a news release from Holmes.

According to the bill, employers would not be charged for unemployment benefits issued between March 15 and Dec. 31 that were paid to those out of work due to COVID-19.

The legislation also creates a “rebuttable presumption” that a first-responder or essential worker who contracts COVID-19 did so in the course of their employment. Employers, however, would have avenues to rebut the worker’s claim.

Those avenues include demonstrating their workplace was following up-to-date public health guidelines for two weeks prior to the employee’s contraction, or that the employee was working from home for a period of at least 14 days prior to the injury claim. They also have the opportunity to prove the employee was exposed to the virus by an alternative source outside the workplace.

Holmes said workers’ compensation does not normally cover illness, but the COVID-19 pandemic is not “normal times.”

“Jobs that are not typically considered hazardous have suddenly become dangerous for workers due to COVID-19,” she said in a news release. “This workplace injury framework protects employees, but it also gives employers the ability to prove they did all they could to prevent COVID-19 infections in their workplace by giving those employers a strong incentive to take the best precautions that experts advise.”

In the House, Rep. Karina Villa, D-West Chicago, gave an emotional plea for members to vote for the bill, noting it was aimed at companies not taking adequate protection measures, such as providing flimsy masks that do not effectively protect against germs.

“I hope that our vote today reflects a unanimous vote, letting those employers know that this is absolutely unacceptable in the state of Illinois,” she said while wearing an apparent flimsy hair net as a mask as a demonstration of ineffective protective gear.

The measure passed the Senate 50-4 Thursday, then the House 113-2 Friday. It will head to the governor.

Its passage came nearly a month after Gov. J.B. Pritzker’s administration was sued for its emergency rules put in place to require employers to pay workers’ compensation benefits if an employee was diagnosed with COVID-19 without proof the illness was contracted at the workplace. Those rules were later withdrawn.

“Manufacturers are first and foremost concerned about the health and safety of their employees, customers, and communities. Today’s agreement strikes a fair balance, allowing employers to defend themselves using an ordinary standard of evidence,” Mark Denler, president and CEO of the Illinois Manufacturers’ Association, said in a news release.

The IMA was one of the organizations filling suit against Pritzker’s rule.