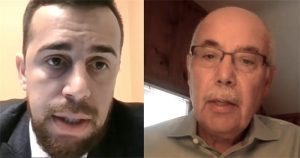 Roberto Valdez, left, of the Latino Policy Forum, and former state Sen. Miguel del Valle Jr. testify before a joint hearing of the House and Senate Redistricting Committees as lawmakers prepare to amend the legislative district maps they approved in May. (Blueroomstream.com)

SPRINGFIELD – Voting rights advocates and minority community members urged Illinois lawmakers on Thursday, Aug. 26 to take more time in redrawing legislative district maps so the general public can have more time to study whatever new maps will be proposed.

“We’re joining other advocates today in asking for more time to provide an efficient analysis of the 2020 census numbers, and to present a map to this committee and to the legislature that can be considered when making these adjustments,” said former state Sen. Miguel del Valle Jr.

His comments came during a joint hearing in Chicago of the House and Senate Redistricting Committees just days ahead of a special session of the General Assembly on Tuesday, Aug. 31, to redraw state legislative district maps for a second time.

But Roberto Valdez, of the Latino Policy Forum, urged lawmakers not to vote on any new maps before the general public has had a reasonable amount of time to review any new proposal.

“It would be ideal to have a minimum of 30 days, again, not only to conduct the analysis, produce a map, but also try to conduct discussion groups with our community-based organizations,” he said. “Ideally 30 days, we know that that’s maybe a stretch.”

Lawmakers approved new maps in May, and Gov. J.B. Pritzker signed those into law. But those maps were based on population estimates using five years’ worth of data from the Census Bureau’s American Community Survey because the release of official, neighborhood-level data from the 2020 U.S. Census was delayed by several months.

Those detailed numbers were finally released Aug. 12, and many analysts have said it shows the districts lawmakers approved in May were vastly unequal in population, thereby violating the U.S. Supreme Court’s “one person one vote” standard.

Kendall County, on the southwest edge of the Chicago metropolitan area, added more than 17,000 people since the 2010 census, or 15 percent, according to the data, making it the fastest-growing county in the state. Alexander County, which includes the town of Cairo at the southern tip of Illinois, lost 36.4 percent of its population, lowering it to just 5,240 people.

But while the Census Bureau has released detailed population figures, it still has not released detailed racial, ethnic and other demographic data that some advocates argued should be factored into the map-making process.

“The next level of demographics based on ethnicities has not been released and will be released soon,” said Dilara Sayeed of the Illinois Muslim Civic Coalition. “We urge you to wait for that. If you choose not to wait for that, we urge you to continue to use community organizations like ours to provide you with more information so that you can be as accurate as possible.”

The mapmaking process that lawmakers have used is already the subject of two federal lawsuits being heard by a three-judge panel in Chicago. One, filed by the Mexican American Legal Defense and Educational Fund, or MALDEF, argues that the maps lawmakers passed in May dilute the voting power of the state’s Latino population.

Another filed by Republican leaders in the General Assembly argues, among other things, that lawmakers failed to enact legal maps by the June 30 deadline set out in the Illinois Constitution and, therefore, should be thrown out and redrawn by a bipartisan legislative commission.

Republicans on the committees, meanwhile, alleged Aug. 26 that Democrats who control the General Assembly have already started drawing new maps behind closed doors and that the public hearings now taking place are only for show.

“I literally witnessed with my own eyes a member of the General Assembly looking at the map, talking to staff about whether it was square enough or not, which is what I overheard,” said Rep. Tim Butler, a Springfield Republican. “There was many members of the majority in that room, looking at the maps. And I would ask you, the people who are going to testify today, have you been invited into those meetings so far to look at the maps? Are you having solid input on what these maps are going to be? No. They’re being drawn by the majority as we saw in the spring with partisan intent.”

Later, when asked what data was being used to draw the new maps, House committee chairwoman Lisa Hernandez, D-Cicero, said she didn’t know and that she hadn’t seen the maps that Butler was talking about. But she said Democrats were determined to draw new districts that would reflect the racial and ethnic diversity of Illinois.

Ami Gandhi of the Chicago Lawyers’ Committee for Civil Rights said there are still many communities of color in Illinois that remain apprehensive about the process.

“We’re hearing time and time again, even in today’s hearing, communities of color themselves, and ourselves, are saying loud and clear that we’re uncomfortable with this redistricting process, with this huge rush, with this lack of transparency, and people do not feel reassured that their rights are being respected,” she said.