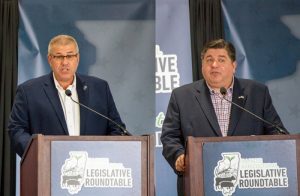 SPRINGFIELD – There was a lot to unpack from the Aug. 24 candidate forum which saw Gov. JB Pritzker and his Republican challenger state Sen. Darren Bailey appear on the same stage, albeit at different times, for the first time this campaign season.

For starters, I wrote an article earlier this week fact-checking the governor’s claim that eminent domain language was removed from the final 2021 energy bill known as the Climate and Equitable Jobs Act. That law, which Pritzker signed, contained a provision giving a private transmission line that authority in seven counties.

Now it’s time to fact check his challenger, too.

“I had several counties in my district two weeks ago that went through a three-hour brownout,” Bailey told a crowd of farmers at Schuler Farms in Lexington. “First time ever. It’s coming. It’s preventable.”

Except there’s no evidence that brownouts have occurred anywhere in Illinois.

And when I asked the Bailey campaign for more specifics on which counties had seen blackouts, they responded only with a statement calling Pritzker’s energy policies extreme.

Yesterday, the Capitol Fax blog appeared to be the first outlet to look into Bailey’s claim, unearthing an unbylined Aug. 5 article posted to a website that’s part of an infamous “pay-to-print” network historically tied to right-wing candidates.

Bailey was heavily quoted in the “article” that noted White and Wayne counties had experienced a three-hour brownout on July 30. Capitol Fax reported that the Wayne-White Counties Electrical Co-op had no such “brownout” event, although there might have been storm-related outages. I called them up and was told the same.

The Midcontinent Independent System Operator, or MISO, is the federally-regulated regional transmission organization that serves 15 states including most of Illinois outside of the Chicago area.

The grid operator told me they had no knowledge of any “brownouts,” which is a term it does not use.

How energy gets from the grid to the home is immensely complicated.

To sum up a portion of it, MISO procures energy capacity each year, which is a promise that generators can put a certain amount of energy online during the grid’s peak demand hours.

What that means for reliability, according to the company’s analysis, is that the “loss of load expectation” – a measure of how long, on average, that available generation capacity is likely to fall short of  load demand – for the subregion that includes Illinois increased from the annual target of 0.1 day per year to 0.179 day per year.

The target is 0.1, not 0, because there will always be a possibility that electricity use exceeds the available capacity, even in “normal” years.

At a 3-hour committee hearing in May, lawmakers heard testimony from energy experts that surprise out-of-state fossil fuel retirements were the main driver of the capacity shortfall this year, as CEJA’s decarbonization measures have not yet taken effect.

Those measures include massive subsidies for renewable and nuclear energy and mandates that fossil fuel generators go offline by 2045 – although state regulators can override those dates in the event of load concerns.

While the likelihood of load interruptions increased only slightly this year, MISO warned at the May committee that as more fossil fuel plants go offline, the likelihood could increase in future years if new generators like renewables or battery storage aren’t put online quickly enough.

“MISO believes it’s likely to get worse before it gets better,” Melissa Seymour, MISO’s vice president of external affairs, told the House committee in May. “Unless more capacity is built, especially capacity able to reliably generate during tight system conditions, the shortfalls we experienced this year will continue to get worse moving forward.”

Some of CEJA’s main backers in the Illinois Clean Jobs Coalition have pointed the finger at MISO, noting at a July news conference that there are 6,000 megawatts of transmission projects in the RTO’s “queue” that are awaiting approval to begin the process of hooking it into the grid.

“MISO has fallen down on the job,” he said. “That’s why Illinois had to pick up the pace in solar and wind and make sure that we’re producing more energy, not less. That is what the Climate and Equitable Jobs Act does. It helps us produce more energy.”

In a statement to Capitol News Illinois in July, MISO said it understands the urgency of putting new power on the grid and it had even more than 6,000 megawatts in the works.

“Currently, MISO is processing 95 generator interconnection queue requests for the state of Illinois (totaling over 15,000 megawatts), which is 12 percent of the total requests MISO has received for the entire 15-state footprint,” spokesperson Brandon Morris said in a July email. “MISO is and continues to be ‘on the job’ of ensuring reliability is maintained while managing through this unprecedented number of unique requests to connect new resources.”

MISO and its member states, Morris said, also recently worked to reduce the amount of time it takes for a generator to connect to the MISO grid, earning praise from the Federal Energy Regulatory Commission.

A few days after their news conference, CEJA backers praised planned transmission upgrades from MISO, noting “they must move faster to approve these renewable energy projects that will bring down prices and improve grid reliability.”

Another possibility is that generators who have been bidding into northern Illinois capacity markets see the higher premiums being paid downstate and decide they’ll sell their capacity commitments elsewhere.

Given the complexity of energy generation, those are just a few of numerous factors that will determine whether “brownouts” go from abstract political talking point to reality in Illinois and elsewhere.