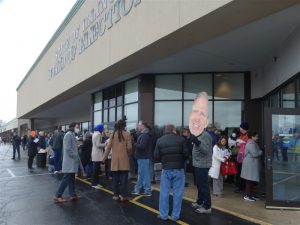 Candidates and their staffs line up outside the Illinois State Board of Elections office early Monday morning, the first day major party candidates could submit petitions to get their names on the June 28 primary election ballot. (Capitol News Illinois photo by Peter Hancock)

SPRINGFIELD – The 2022 campaign season got underway in earnest Monday, March 7 as candidates lined up in front of election offices to turn in petitions to get their names on the June 28 primary election ballot.

Hundreds of candidates and their aides braved cold wind and snow early Monday to line up outside the Illinois State Board of Elections office in Springfield to ensure their placement on the ballot.

Monday was the first day established party candidates could file their petitions. The deadline for turning in petitions is next Monday, March 14.

Illinois voters will cast ballots this year for governor and lieutenant governor as well as statewide constitutional officers, all 118 seats in the Illinois House and 59 seats in the state Senate, circuit, appellate court and state Supreme Court judges, congressional seats, and a U.S. Senate seat currently held by Democrat Tammy Duckworth.

Voters in parts of Illinois will also cast ballots for county board members and various other local government offices.

This year’s primary was pushed back from its normal time in early March due to delays in the redistricting process brought about by delays in the release of 2020 census data due to the COVID-19 pandemic.

That revised schedule could have an impact on who turns out to vote in the primary. The late June date means many college students who would normally vote on campus will be home for summer break while many other voters who would normally turn out in March may be away on vacation.

“I don’t know. Hard to tell, to be honest,” Democratic Gov. J.B. Pritzker said when asked how the revised date might affect the primary. “We haven’t had that in Illinois, so long as I can remember anyway, so no. I’m excited. I really think we’re in great shape.”

Pritzker and Lt. Gov. Juliana Stratton are waging their first reelection bid this year. They won the 2018 election with 54.5 percent of the vote over former Republican Gov. Bruce Rauner and Lt. Gov. Evelyn Sanguinetti.

It is not believed they will face any primary opposition this year but a full slate of Republican candidates are lining up to challenge them. Among the challengers for governor are Aurora Mayor Richard Irvin; state Sen. Darren Bailey of Xenia; former state Sen. Paul Schimpf of Waterloo; Chicago-area businessman Gary Rabine; and venture capitalist Jesse Sullivan of Petersburg, among others.

Speaking at a campaign kickoff rally at a local union meeting hall in Springfield shortly after submitting his petitions, Pritzker touted his efforts to improve job and economic opportunities for middle class workers and marginalized populations in the state.

“In a world that increasingly feels like us versus them, this campaign is about what we can do together. And our vision for a better Illinois doesn’t happen without a fight,” Pritzker said.

Republicans, meanwhile, have so far been attacking Pritzker for the state’s rising rate of violent crime and the impact that his response to the COVID-19 pandemic had on the state’s economy.

“We’re killing small business in the state like no other state and we’ve got to stop that,” Rabine said during an interview outside the ISBE office. “We’ve got to bring businesses and jobs and people back to Illinois instead of chasing them away.”

Outside of the governor’s race, the most high-profile race in state government this year may be the contest for secretary of state, where incumbent Jesse White is retiring after six terms in office.

On the Democratic side, former State Treasurer Alexi Giannoulias has the support of some of the state’s largest labor unions and the Cook County Democratic Party, while other high-profile Democrats, including Pritzker and White, have thrown their support behind Chicago City Clerk Anna Valencia. Also in the race is Chicago Ald. David Moore.

On the Republican side, the race appears to be between John Milhiser, a former U.S. Attorney for the central district of Illinois, and state Rep. Dan Brady of Bloomington.

Irvin tops a list of Republican candidates running as a slate for statewide office. The slate includes attorney general candidate Steve Kim of Deerfield; treasurer candidate Rep. Tom Demmer of Dixon; and comptroller candidate Shannon Teresi of Crystal Lake. Milhiser is the secretary of state candidate on the slate.

Those GOP slate candidates were scheduled to host a kickoff event Monday evening in Springfield.

Mail-in ballots must be postmarked or returned in-person to the election authority by Election Day, June 28.