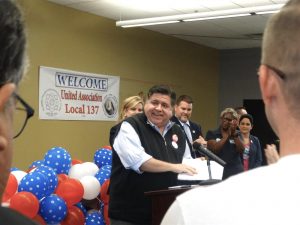 SPRINGFIELD – Democratic Gov. J.B. Pritzker was crisscrossing the state Monday while his Republican challenger, state Sen. Darren Bailey, focused on the Chicago suburbs as they both made their final pitches to voters ahead of Tuesday’s general election.

Pritzker, along with other Democrats at the top of the ticket, held get-out-the-vote rallies at union halls in five cities aiming to increase turnout among labor voters. That included pleas for passage of the so-called Workers Rights Amendment that would guarantee employees the right to engage in collective bargaining.

“To protect our fundamental freedoms, to lift up working families, we have to elect pro-labor, pro-choice, pro-voting rights, pro-civil rights Democrats up and down the ticket, right?” Pritzker called out to a cheering crowd in Springfield.

As he has through most of the campaign, Pritzker focused on the accomplishments of his first term, including balancing the state budget, earning multiple credit upgrades on the state’s bond rating, passing a $45 billion infrastructure package and enshrining reproductive health care rights, including abortion access, as a “fundamental right” under state law.

If elected to a second term, he told reporters during an impromptu news conference afterward, he would propose free college tuition for people at or below the median income, growing new jobs in the state and continuing to balance the budget in order to build up the state’s cash reserves. 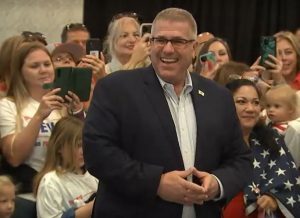 “I know it sounds a little boring to talk about that,” he said. “But balancing the budget is perhaps the most important thing that we can do going forward if you want to lower taxes in the state, if you want to pay for the services that people need, and education, which is so vitally important for our future.”

“JB Pritzker uses our kids to make political points,” Bailey said at a rally in Oak Brook. “He locks schoolchildren out of their classrooms, and he tries to twist their tender minds with ideology in his quest to be the most left-wing governor in America. Now his minions are looking to impose vaccine mandates on our children.”

Pritzker, however, said he had no plans to mandate any vaccine requirements, saying Bailey was “lying” in “a desperate attempt to win some votes.”

“There’s absolutely nothing that’s happening that’s out of the ordinary. He’s just making things up,” Pritzker said when asked about Bailey’s allegation.

Bailey took part in numerous lawsuits against the Pritzker administration over its COVID-19 mitigation orders. DeVore served as his attorney in those suits.

As of Monday, according to the State Board of Elections, nearly 1.2 million ballots had already been cast in the election, either by mail or at in-person polling sites. Regular polling sites will be open from 6 a.m. to 7 p.m. Tuesday.

The Pritzker campaign is hosting an election night watch party Tuesday night at the Marriott Marquis Hotel in Chicago. The Bailey campaign will gather at the Crowne Plaza Springfield convention center in Springfield.