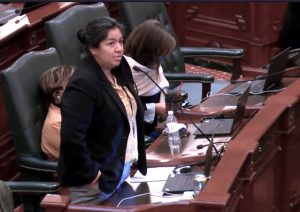 SPRINGFIELD – A Democratic member of the Illinois House has filed a motion in federal court to intervene as a separate defendant in a pair of lawsuits challenging the legislative redistricting plan that was signed into law in September.

Rep. Angelica Guerrero-Cuellar, who represents the largely Latino 22nd District on Chicago’s southwest side, is arguing that the composition of her district, and therefore her chances of reelection, could hang in the balance if the court decides to alter the map.

A three-judge panel in the Northern District of Illinois is hearing the lawsuits challenging the new maps. One was filed by Republican leaders in the General Assembly, Sen. Dan McConchie and Rep. Jim Durkin. Another was filed by the Mexican American Legal Defense and Educational Fund, or MALDEF.

The third case was filed by a group of civil rights organizations that include the East St. Louis Chapter of the NAACP. It was recently transferred to the Northern District to be heard alongside the other two.

Both the Republican and the MALDEF suits argue that the new districts dilute Latino voting power, either by “packing” them into concentrated districts or by “cracking” Latino neighborhoods into separate districts.

The Republican suit specifically mentions the 22nd District as one of only four new districts in which Latinos make up more than 50 percent of the voting age population. But it argues that lawmakers could have formed as many as six Latino districts on Chicago’s southwest side and southwestern suburbs.

“The McConchie Complaint explicitly proposes a revised September map that cuts through the 22nd District,” the motion states, referring to one alternative map portrayed in the GOP complaint.

The motion also states that Guerrero-Cuellar has a right to intervene, “to protect her right to reelection.”

Guerrero-Cuellar was appointed to the 22nd District seat earlier this year to replace former House Speaker Michael Madigan, who resigned. She was also the only Democrat in the Illinois House who voted against the congressional redistricting plan that passed during the recent fall veto session. One other Democrat, Rep. Kelly Cassidy of Chicago was recorded as not voting.

During floor debate of congressional maps, Guerrero-Cuellar cited concerns about how the area in the 22nd legislative district was split between multiple congressional districts.

“And there was something done to that district intentionally to exclude Latinos and that representation,” she said. “So when someone tells me, ‘Hey, we’re here to represent the Latinos on the southwest side,’ I’m gonna say, hold on. That was not the case.”

According to U.S Census data cited in court documents, nearly 63 percent of the voting age population of the district identifies as Latino.

The court issued an order Tuesday, Nov. 2 saying it would take Guerrero-Cuellar’s motion under advisement. A status hearing in the case is scheduled for 11 a.m. Friday.