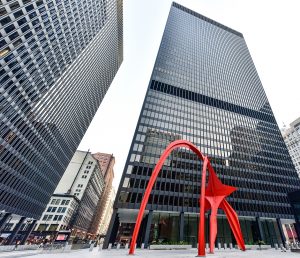 The U.S. federal courthouse for the Northern District in Chicago will be the site of oral arguments beginning Dec. 7 in a case involving challenges to the recently-passed legislative redistricting maps in Illinois. (Photo courtesy of U.S. District Courts)

SPRINGFIELD – Lawyers for the General Assembly’s Democratic leaders filed documents in federal court Wednesday denying that newly drawn state legislative district maps amount to racial gerrymandering, instead accusing the plaintiffs in the three lawsuits of trying to use race to redraw districts for their own purposes.

Wednesday’s filings are the Democrats’ response to proposed changes in the district maps submitted last week by Republican leaders, a Latino advocacy group in Chicago and Black civil rights groups in the Metro East region.

The new maps will determine how communities across the state are represented in the General Assembly in Springfield for the next 10 years.

Due in large part to the pandemic, the U.S. Census Bureau did not release official, detailed numbers from the 2020 census until mid-August. Lawmakers then called a special session to adjust the initial maps they had approved in the spring – maps that were based on population estimates from survey data – and passed a new set of maps Aug. 31. Pritzker signed them into law Sept. 24.

Among other things, the census numbers showed Illinois had lost population overall since the 2010 census. But there had been a substantial increase in the state’s Latino population while Black and white populations both declined.

In separate suits, Republican leaders and the Mexican American Legal Defense and Educational Fund, or MALDEF, both argued that despite the growth in the Latino population, the new maps actually reduce the number of districts in which Latinos make up a majority, or a large plurality, of the voting age population. They argued that violates both the U.S. Constitution and the federal Voting Rights Act of 1965.

In another suit, the East St. Louis Branch of the NAACP, along with the NAACP’s state chapter and the United Congress of Community and Religious Organizations, argued that in the Metro East area, concentrated areas of Black voters were split into three separate House districts solely for the purpose of protecting white Democratic incumbents.

In their court filing Wednesday, however, lawyers for the Democratic leaders denied any constitutional or legal violation.

“The September Redistricting Plan … protects minority voting strength and provides Hispanic and Black voters more than an equal opportunity to elect candidates of their choice,” their brief states. “The three plaintiffs have failed to provide evidence to support otherwise and have not demonstrated that the September Redistricting Plan violates the Voting Rights Act or the U.S. Constitution.”

The NAACP plaintiffs and the Republicans both proposed redrawing the Metro East region to create a largely-Black House district in East St. Louis.

In their response Wednesday, however, the Democratic leaders argue that none of those proposals overlap with each other and that each would have ripple effects that would affect neighboring districts that have not been contested.

“In other words, plaintiffs have proposed three competing remedial plans, with no proposal for reconciling the differences,” attorneys for the Democrats wrote.

In northwest Chicago, the Democrats argue, the proposed MALDEF plan would create one Latino Senate district and three Latino House districts by reconfiguring districts that are already Latino majority districts while at the same time reducing Latino influence in another Senate district that has elected a Latino since 2003.

Further, they argue, the GOP plan “moves population in and out of neighboring districts to benefit the Republican incumbent in (House District) 20 (Rep. Bradley Stephens) and give the Republicans a better opportunity to win HD 48 and HD 56.”

In southwest Chicago, Democrats argue, lawmakers tried to balance a number of competing requests from different communities, including a request to establish an Asian American influence district in the area known as Chinatown as well as a Latino district in the neighboring area known as Little Village.

“The General Assembly, understanding the different political factions in this area, worked to carefully balance the interest of progressive and moderate factions in separate Senate and House districts to reduce political infighting among Latino groups,” lawyers for the Democrats wrote.

In the Metro East region, the Democrats said they “do not dispute that partisanship played a central role in drawing these districts.”

“As the region has become more politically polarized, the Democrats in the General Assembly prioritized protecting the Democratic members elected in Republican southern Illinois, including the preservation of two districts that have elected Black Democrats for more than 40 years,” they wrote.