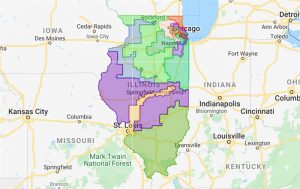 “These maps align with the landmark Voting Rights Act and will ensure all communities are equitably represented in our congressional delegation,” Pritzker said in a statement.

Due to the state’s declining population, Illinois will have only 17 congressional seats after the 2022 elections, one fewer than it currently has.

Because most of the state’s population loss occurred in southern Illinois, the new maps combine what are currently the 12th and 15th Districts, held by Republican Reps. Mike Bost and Mary Miller, respectively, into a new 12th District that covers most of the southern one-third of the state.

Miller, however, has indicated she might run in the newly-drawn 15th District, which stretches from west-central Illinois eastward across the state, curling around the city of Champaign and stretching back west and south to an area just west of Collinsville.

It also creates a new 13th District stretching from the Metro East region across a narrow strip of land through Springfield and Decatur, to Champaign.

In the Chicago metropolitan area, the maps create a new largely-Latino 3rd District that currently has no incumbent while also putting Democratic Rep. Marie Newman’s residence in the same district as fellow-Democratic Rep. Jesús “Chuy” Garcia.

Newman, however, has indicated she intends to run in the new 6th District where she would face Democratic Rep. Sean Casten in a primary.

Analysts at the Princeton Gerrymandering Project gave the new maps an overall grade of F in the categories of partisan fairness, competitiveness and compactness. They estimate the maps create 14 likely Democratic districts and three likely Republican districts.

The Illinois delegation is currently split between 13 Democrats and five Republicans.

The political reform advocacy group CHANGE Illinois, which has advocated for an independent redistricting commission, also harshly criticized the new maps, saying it was designed to produce “predetermined winners and losers in nearly all 17 districts.”

“The map is undemocratic and leaves all voters without choices, undermining the very elections that are supposed to allow voters to hold officials accountable,” the organization said in a statement.

Pritzker, however, said the maps align with the federal Voting Rights Act of 1965, which prohibits practices and procedures that discriminate on the basis of race, color or membership in a recognized language minority.

He said they also align with the Illinois Voting Rights Act, which requires redistricting plans to preserve clusters of minority voting groups that are large enough and cohesive enough to exert collective electoral power.

Pritzker’s signing of the congressional maps comes less than two weeks before a three-judge federal court panel will hear oral arguments in three separate lawsuits challenging the new legislative maps that Democrats pushed through in August and Pritzker signed into law in September.

Plaintiffs in those suits include Republican leaders in the General Assembly; a group of Latino voters in the Chicago area represented by the Mexican American Legal Defense and Educational Fund, or MALDEF; and a group of civil rights organizations that include the East St. Louis Branch of the NAACP, the Illinois State Conference of the NAACP and the United Congress of Community and Religious Organizations, or UCCRO.

Arguments in those cases are scheduled to begin Tuesday, Dec. 7.