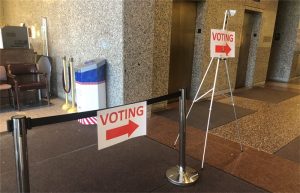 SPRINGFIELD – Early voting hours and locations greatly expanded across the state this week as the campaign season entered its final two-week stretch.

Polling places opened across the city of Chicago as well. Information on early voting for each local election authority can be found on the Illinois State Board of Elections website here, or by visiting elections.il.gov.

The candidates for governor, meanwhile, continued their final pushes to get out the voters that have not yet cast a ballot.

On Monday, the governor rallied with teacher unions in Peoria, then in Urbana, speaking to some of the Democratic Party’s most important backers. That was the governor’s latest labor union stop, following a Sunday appearance before the International Union of Electric Engineers Local 150 in suburban Countryside.

“I really mean it, democracy is on the line and that’s not an exaggeration,” Pritzker said in Urbana alongside state lawmakers and representatives of the Illinois and American Federation of Teachers labor unions. “You see, people like Darren Bailey – election deniers and insurrectionist supporters – are on the ballot. Fundamental freedoms are under attack and Donald Trump is waiting in the wings to take the reins of power in 2024.”

That Bailey is too extreme for Illinois is a message Pritzker has emphasized throughout the campaign, and he has remained on the attack against his conservative rival even as recent polls have shown the incumbent with a double-digit lead. As of Oct. 18, the political handicapping website FiveThirtyEight, which aggregates data from multiple polls, estimated Pritzker’s average lead at 14.3 percentage points, 49.5 percent to 35.2 percent. It had the Libertarian candidate, Scott Schluter, at about 6.4 percent.

Bailey’s campaign released its own sponsored poll, which was logged by FiveThirtyEight, that showed him trailing Pritzker by about two percentage points – a drastic outlier from multiple nonpartisan polls.

In his daily Facebook video Tuesday – a method of virtual outreach that reaches in the thousands to tens of thousands of watchers daily – Bailey contended he was in the lead.

“Cindy and I and many of our prayer warriors across the state, we dedicate Tuesday to prayer and fasting and just waiting, you know, to see what deception and what lies and what tricks JB Pritzker has up his sleeve in these next two weeks because he knows he’s losing,” he said.

The Republican spent Monday morning greeting voters at the Belmont train station in Chicago while his Twitter account spent the early part of the week retweeting stories about shootings in the city that he has repeatedly described as a “hellhole.”

He spent the previous week on a “get out the vote” bus tour, stopping in 16 cities and towns across the state, including Anna, Belleville, Springfield, Champaign, Arthur, Joliet, Aurora and Naperville.

At the Springfield stop last week, Bailey once again mentioned a “zero based budget” as his plan for balancing state finances, although he has persistently refused to name any state spending cuts he would look to implement if elected. He has said that will be determined by the agency heads he hires to replace the current agency directors he plans to fire. He has said he will plan to name the replacement candidates after the election.

Bailey told Crain’s Chicago Business in an interview that he believes schools receive too much state funding, and he has since stated that he believes administrators are paid too much. Administrative salaries are set by local school boards.

“Anytime public school hears the word ‘more funding’ which J.B. Pritzker loves to toss money at problems without any transparency or any accountability, everyone automatically thinks of more administration,” Bailey, a former school board member in Clay County who frequently voted to raise local property tax levies, said in his Springfield stop.

“We’ve got to slash administrative costs and we’ve got to get that money to go to the classrooms,” he added. “Because the vast majority of our students all across Illinois cannot read, they cannot write, they cannot do math at grade level and that must change.”

His response is to “come in with a totally new approach to government because nothing’s working right,” he said.

Pritzker, meanwhile, touted his first-term legislative wins to the union members in Urbana, highlighting the increased minimum wage to $15 hourly by 2025, protections for women seeking abortions in Illinois, the Climate and Equitable Jobs Act that increases investment in renewable energy, and the requirement that LGBTQ and Asian American history be taught in Illinois schools.

He also pointed to the legalization of recreational marijuana and the fact that spending for Monetary Award Program grants for Illinois college students has increased by $200 million under his term.

“We’re going to have to fight for what we believe in,” Pritzker said. “We’re up against a wave of election deniers, anti-choice extremists who will stop at nothing to turn back the clock and send us back to the Dark Ages. It’s easy to feel scared about the future when you think of all that. But if we fight like hell for the next two weeks and win this election, we can get back the radical right wing and take our country back.”