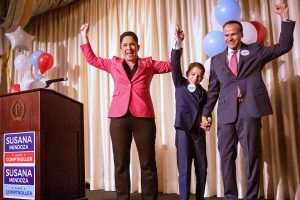 Comptroller Susana Mendoza shown here with family celebrating her third successful statewide election on Nov. 8. She was the lead vote-getter for Democrats in the November election. (Photo courtesy of Susana A. Mendoza Facebook page)

SPRINGFIELD – The Illinois State Board of Elections certified its election results Monday, Dec. 5 putting the final stamp on another Democratic sweep of statewide offices.

The final margin of victory for Gov. J.B. Pritzker over Republican challenger state Sen. Darren Bailey was a resounding one, about 12.54 percentage points. Pritzker notched more than 2.25 million votes to Bailey’s 1.74 million.

The lead vote-getter for Democrats was Comptroller Susana Mendoza in her third successful statewide election. Her 2.33 million votes to nearly 1.68 million votes for Republican candidate Shannon Teresi represented a win of just over 16 percentage points, down from her near 23-point victory total in 2018.

She assumes the mantle of most successful statewide Democrat that has for over two decades been claimed by Secretary of State Jesse White. The 88-year-old who has held that office since 1998 didn’t run again this year, paving the way for Democrat Alexi Giannoulias to win a contentious Democratic primary.

Giannoulias, the former state treasurer, received about 2.2 million votes to just under 1.8 million for state Rep. Dan Brady of Bloomington, the Republican nominee. Last week, Giannoulias and Brady announced that the vanquished Republican would join the winner’s transition team. The margin of victory was about 10.69 percentage points.

“I am honored that Secretary-elect Giannoulias is rising above party politics by drawing on that experience to make the office the best that it can be,” Brady said in a Nov. 30 statement. “I may be leaving elected office in a few short weeks, but I have always desired to help the people of Illinois in any way that I can. I appreciate this opportunity to use my unique knowledge to help enhance a statewide office that affects the lives of more Illinoisans on a daily basis than any other.”

State Treasurer Michael Frerichs earned a third term, beating Republican Rep. Tom Demmer, of Dixon, 54.29 percent to 43.48 percent. The 10.81 percentage point margin was down from about 19 percent in 2018, but well above Frerichs’ 2014 performance in which he won by fewer than 10,000 votes.

The amendment was approved by 2.2 million of the 4.1 million voters to cast a ballot in the election. It received 58.72 percent approval from those voting on the question.