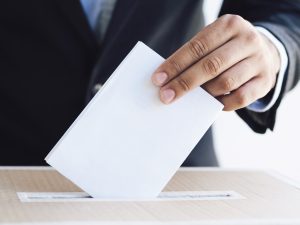 The Committee for the Illinois Democracy Amendment is advocating for a state constitutional change mandating the General Assembly to take roll call votes on legislation proposing “stronger ethical standards for Illinois public officials.”

SPRINGFIELD — An Illinois group trying to get a constitutional amendment on the Nov. 3 ballot is not entitled to looser regulations during the COVID-19 pandemic, a federal appeals court ruled July 8.

The Committee for the Illinois Democracy Amendment is advocating for a state constitutional change mandating the General Assembly to take roll call votes on legislation proposing “stronger ethical standards for Illinois public officials.”

It would also allow residents to introduce related bills by submitting a petition including at least 100,000 signatures.

In a lawsuit filed against the secretary of state’s office and State Board of Elections, the organization’s attorneys argued Gov. J.B. Pritkzer’s social distancing and stay-at-home orders unconstitutionally prevented canvassers from securing the required 363,813 hand-written signatures — or, 8 percent of votes cast for governor in the last election — by May 3.

The three U.S. Court of Appeals judges wrote that the committee brought the problem on itself. The group was founded April 1, according to documents filed with the State Board of Elections, almost 17 months after Illinois rules permitted signature collection to begin and one month after Pritzker issued executive orders to manage COVID-19’s spread.

Committee members “had plenty of time to gather signatures before the pandemic began,” the judges wrote in their ruling. “That’s a good reason to conclude that they are not entitled to emergency” considerations.

The court acknowledged social distancing and stay-at-home restrictions “surely make it hard to round up signatures,” but wrote changes to social behaviors caused by the pandemic would contribute to the difficulty as well.

And the judges added this matter is “wholly” one of state law because the U.S. Constitution does not guarantee a right for voters to include initiatives on the ballot — Illinois law does.

“If we understand the governor’s orders, coupled with the signature requirements, as equivalent to a decision to skip all referenda for the 2020 election cycle, there is no federal problem,” the judges wrote in their opinion. “Illinois may decide for itself whether a pandemic is a good time to be soliciting signatures on the streets in order to add referenda to a ballot.”

Former Gov. Pat Quinn, an attorney representing the committee, said in an interview Friday he and his clients are “disappointed.”

They brought this lawsuit, he said, because “it’s impossible” to comply with state law mandating petitions be circulated in person and with the governor’s social distancing order.

“The state should not be allowed to try to cancel out the rights of voters to circulate petitions to put issues on the ballot,” Quinn said. “It makes the whole process very dangerous. We’re going to keep fighting.”

Their options, he said, include appealing the decision — the committee is “free” to pursue the issues in this case in a district court, the judges wrote in their ruling — or attempting to change the law “so voters have the option to sign petitions electronically during the pandemic, which is not going away.”

Quinn pointed out his ruling comes 40 years after the Cutback Amendment — which decreased the number of lawmakers in the General Assembly — was successfully added to the ballot. It remains the only one to do so in Illinois history.

“These are fundamental rights that have to be protected from politicians and the State Board of Elections, who are doing everything they can to keep these off the ballot,” he said.