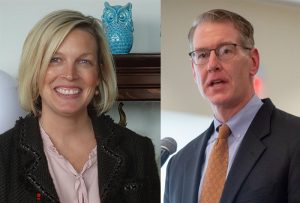 SPRINGFIELD – Republicans chose new leadership for their caucuses in the Illinois General Assembly on Tuesday night, Nov. 15 while the two Democratic leaders have each announced they have the votes to maintain their positions.

The change in leadership comes after Democrats maintained control of every statewide office and had strong gains in last week’s elections across the rest of state government, aside from in the state Senate.

In that chamber, Curran will preside over a Republican caucus outnumbered by Democrats at least 38-20, with one race from the Nov. 8 election still too close to call. That means the GOP will have picked up two or three seats.

First appointed in 2017 to the suburban district where former GOP Senate leader Christine Radogno was previously seated, Curran won reelection in 2018 and ran unopposed in 2022. He previously served as an assistant Cook County prosecutor and DuPage County Board vice chairman, and he is now a private practice attorney.

“I am humbled and honored to have the full support of my Senate Republican colleagues to serve as their new leader in the 103rd General Assembly,” Curran said in a statement. “We stand ready, with our focus directed toward the future, on developing solutions that will address the critical issues facing our state. We are equally dedicated to growing our ranks, which will give all Illinoisans greater representation and balance in their state government.”

He replaces Dan McConchie, of Hawthorn Woods, who was chosen as Senate minority leader after the 2020 elections. McConchie called his leadership run a privilege and wished Curran well.

“When I assumed this role, I committed to grow the caucus by recruiting outstanding candidates and providing them with resources so they had a chance to win despite Pritzker’s wallet and the gerrymandered maps that put us at a severe disadvantage,” McConchie said in a statement. “To that end, I was able to raise the most money the Senate Republicans have perhaps ever seen and will leave the caucus with more members than I started — even as our party saw defeats in every other area.”

McCombie previously served as mayor of Savanna and was first elected state representative in 2016, defeating incumbent Democrat Mike Smiddy for the seat in the Quad Cities area. She easily won reelection in 2018 and 2020 and ran unopposed this year.

“The House Republican Caucus is focused on helping Illinois families by offering common sense solutions to the many problems our state faces,” McCombie said in a statement. “We will be a unified force that will grow our party by sticking to our core values and ending the corruption that has pervaded state government.”

McCombie’s name briefly surfaced in 2020 as a potential challenger for former House Republican Leader Jim Durkin, of Western Springs. But Durkin secured the votes for reelection at the time.

After House Republicans lost at least four, or potentially five, net seats in this year’s general election, giving Democrats up to a 78-40 supermajority, Durkin announced he would not seek another term as leader. He had not announced plans to resign his seat as of Tuesday.

Durkin had served as minority leader since 2013 and said last week the near decade run has “been the honor of a lifetime.”

“But it’s time for the Illinois Republican Party to rebuild with new leaders who can bring independents back to the party that are needed to bring change to the state,” he said in a statement. “I am proud of the work the House Republican caucus has accomplished under my tenure and thank everyone who played a part along the way. I began this journey as a voice of moderation and conclude this journey the same way I started, a voice of moderation.”

Senate President Don Harmon also announced he had the votes to retain that title Tuesday night.

“I want to thank my colleagues for their continued support,” he said in a statement. “Our accomplishments in the Senate are a team effort. We head into a new session collectively focused on moving Illinois forward.”

House Speaker Emanuel “Chris” Welch announced that he had the votes for another term last week, touting his caucus’ efforts toward fiscal stability, expanding resources for community outreach, protecting abortion rights and taking “steps to rebuild confidence in state government.”

“We have more work to do – and with a strong, diverse, and talented Democratic Caucus alongside me, I am excited to continue the work Illinoisans have sent us to do,” Welch said in a statement.