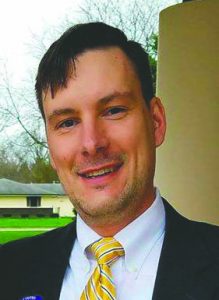 SPRINGFIELD — A central Illinois Republican state senate candidate who does not have enough valid signatures to qualify for the November ballot asked a federal judge Tuesday, June 23, to also apply loosened election requirements to him.

After the March 17 primary election, Alexander Ruggieri was chosen to fill the Republican Party’s nomination vacancy for the 52nd senate district race. To succeed in qualifying for the general election ballot, where he would challenge incumbent Scott Bennett, D-Champaign, Ruggieri needed to collect 1,000 voter signatures and submit his petition to the Illinois State Board of Elections by June 1.

According to his court filing, he gathered 1,152 signatures. After election officials reviewed the validity of those signatures, though, they determined only 949 were acceptable. That objection “threatens to keep Ruggieri from the general election ballot,” he argued.

Ruggieri, in an effort to qualify for the Nov. 3 election, requested he be looped into an existing court order that applies to third party candidates for the upcoming election cycle. If a judge signs off, the order would, among other things, lower the threshold of signatures Ruggieri must collect by 90 percent, push his filing deadline to July 20 and allow him to submit electronic signatures.

Rebecca Pallmeyer, chief judge of the Northern District of Illinois, made that ruling in a lawsuit filed by the Libertarian and Green Parties of Illinois that challenged the constitutionality of the state’s election requirements while Gov. JB Pritzker’s stay-at-home and social distancing orders were in effect.

A federal appeals court Sunday denied the Illinois State Board of Elections’ request to suspend enforcement of Pallmeyer’s order.

“Like the independent and new party (candidates) in this case, Ruggieri’s signature collection has been materially adversely affected by the COVID-19 pandemic and the pendency of Governor Pritzker’s Executive Orders,” Ruggieri’s attorney John Fogarty Jr. wrote in a court document filed in the Northern District of Illinois.

He added that while Ruggieri’s appeal was not filed as an emergency, it “presents emergent issues, as it is anticipated that the (Board of Elections) will meet on July 20, 2020, at the latest, and at that time enter an order as to whether Ruggieri may appear on the General Election ballot.”

Illinois’ election code files candidates into two categories — those running under the banner of “established” parties, typically Democrats and Republicans; and those running as members of a “new” party, of which Libertarians and Greens qualify for this election cycle.

A Republican running for a state senate seat, for example, must collect 1,000 signatures to qualify for the party’s primary election. If that candidate wins the primary, he or she is automatically included on the general election ballot.

In Ruggieri’s case, because he is attempting to fill a vacancy, he must gather that same number of signatures and file them with the Board of Elections no later than 75 days after the primary election’s conclusion.

An independent candidate running for that same office is required to gather anywhere from around 3,000 to 6,000 signatures, according to the election code.

“Independent and new party candidates are not alone in having to collect petition signatures in COVID-19-affected conditions,” Fogarty wrote in a court document. “Certain established party candidates, like Ruggieri, also were required to collect petition signatures while under the effects of COVID-19 and the governor’s successive ‘stay at home’ orders.”

His argument centers around the U.S. Constitution’s equal protection clause — Ruggieri contends that he will be “prejudiced” if a judge denies his request because “he will have been required to collect his signatures under the very same conditions as independent and new party candidates.”

Fogarty characterized Pallmeyer’s order as containing “disparately relaxed standards,” according to the filing. If a judge decides Ruggieri does not qualify for relief under that order, he will likely not appear on the general election ballot in November.

There will be a hearing Friday in Chicago where a judge will rule on his motion.

A spokesperson for the State Board of Elections said officials do not “have any comment” on the filing.