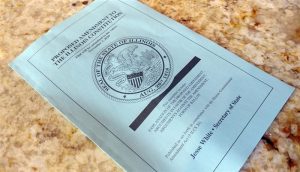 Illinois voters rejected a proposition that would have amended the state constitution to fundamentally change the income tax system.

The graduated tax amendment, a key platform of the Gov. J.B. Pritzker administration, was trailing 55 to 44 percent as of 12:30 p.m. on Wednesday. Nov. 3 with 97 percent precincts reporting,

The proposition specifically called for Article 9, Section 3 of the Illinois Constitution to be amended to would read:

“The General Assembly shall provide by law for the rate or rates of any tax on or measured by income imposed by the State. In any such tax imposed upon corporations the highest rate shall not exceed the highest rate imposed on individuals by more than a ratio of 8 to 5.”

That would replace the current language, which states:

Due to outstanding mail ballots and the multiple paths to passage, results could take weeks to certify.

The amendment would removes a provision from the Illinois Constitution that requires any income tax to be levied at a flat rate on any level of income – the current rate is 4.95 percent.

Passage of the amendment would allow lawmakers to apply different tax rates on varying levels of income. Of the 42 states that have an income tax, 32 and Washington, D.C., have a graduated rate structure, while Illinois is one of nine that impose a flat tax.

While the amendment itself does not set any tax rates, legislation already passed by lawmakers and signed by the governor would take effect in January if the amendment passes. The rates created by that legislation would apply to six tax brackets, ranging from 4.75 percent on income up to $10,000 to 7.99 percent on all income for individual filers making more than $750,000.