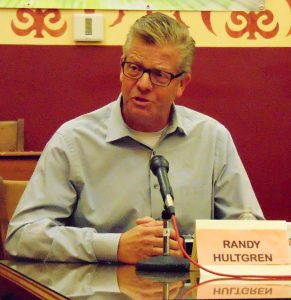 That may have been an understatement.

If the Oct. 23 joint appearance with Democratic challenger Lauren Underwood is any indication, voters will actually pick between starkly different world views.

“The voters have the clearest choice they’ve ever had,” said Hultgren, a four-term conservative Republican. “Do we want these next couple years to be about results and growth and opportunity? Or do we want to be focused on resistance and impeachment and other things?”

Hultgren and Underwood, a progressive and first-time candidate, held their lone public joint appearance of the campaign Oct. 23, a mostly issues-oriented discussion before an overflow crowd at the old Kendall County Courthouse in Yorkville. 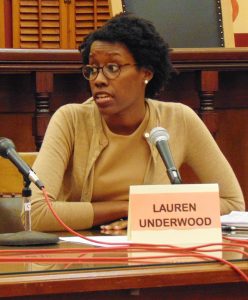 Questions posed by a three-person panel ranged from immigration to environmental protection to college student debt to preserving Social Security and similar programs. Only Hultgren mentioned possible impeachment of President Donald Trump in the next Congress. Underwood did not raise the issue and earlier called any impeachment talk “premature.”

Instead, the most contentious topics centered on health care and the economy.

Underwood blasted a series of Hultgren votes to repeal the Obama-era Affordable Care Act and what she called a broken promise to protect people with pre-existing medical conditions. She said Hultgren instead voted for a Republican replacement bill that reduced those protections.

“He said he was only going to support a version of Obamacare repeal that let pre-existing conditions keep their health-care coverage,” said Underwood, a registered nurse and former Obama Administration health-care adviser. “And then he voted for the American Health Care Act, the version of repeal that did the opposite. … I was very upset and decided to run.”

Hultgren said Underwood was misinformed and that protections for people with pre-existing conditions were in an ACA replacement bill.

“The only thing I can guess is that Lauren hasn’t read the bill,” said Hultgren, who insisted that he favors such protections. “I encourage her to read it.”

But Underwood maintained the bill did lack adequate coverage.

“The version that Mr. Hultgren speaks of — the American Health Care Act — did not create an opportunity for individuals like me, with a pre-existing condition, to have affordable coverage,” she said.

Hultgren, who voted last year in favor of President Donald Trump’s tax cut and economic package, was also upbeat on the state of the economy and nation.

“Right now, we are living in some of the best economic times of my entire lifetime,” he said. “We’ve got historic lows of unemployment, we have record highs of employment, we’ve got record numbers of growth and we’ve seen real reduction and right-sizing of regulation. Opportunity is on the rise.”

But Underwood said benefits from the $1.5 trillion tax cut were not widely shared.

“The Tax Cut and Jobs Act has contributed an additional trillion dollars to our deficit and middle class folks and small businesses are not seeing the benefits of that tax policy,” she said. “Instead, the benefit is passed on to the corporations and wealthiest 1 percent of Americans, leaving taxpayers here in the 14th district high and dry.”

A New York Times poll this month found Hultgren with a four-point lead, a margin of error of 4.6 percent either way and 10 percent undecided. A pair of other analysts called the race a tossup while two more said it leaned Republican.