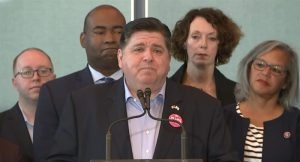 Gov. J.B. Pritzker speaks at a news conference Tuesday, July 26 in Chicago with members of the Democratic National Committee in an attempt to land the 2024 DNC convention for the city of Chicago. At the right is U.S. Rep Robin Kelly, who chairs the state’s Democratic Party. (Credit: Chi.gov)

SPRINGFIELD – Illinois Democrats are vying to make Chicago the host city for the Democratic National Convention in 2024 while considering who will lead their party for the next four years.

Meanwhile, the state’s Republican Party is hearing calls for a censure of one of its sitting congressmen.

Officials for the Democratic National Committee were in Chicago on Tuesday, July 26 as state leaders, including Gov. J.B. Pritzker and Chicago Mayor Lori Lightfoot, called a news conference to tout the city as a potential host for the Democrats’ 2024 nominating convention.

DNC Chair Jaime Harrison said at a Tuesday morning news conference in Chicago the committee was looking for a city that represents diversity, inclusion and opportunity. He said it will be the first big showcase for President Joe Biden and Vice President Kamala Harris, who didn’t have a convention in 2020 due to the COVID-19 pandemic.

Other finalist cities include New York City, Atlanta and Houston.

Pritzker, whose name has frequently been mentioned in the conversation as a potential replacement for Biden if he doesn’t run in 2024, said he looks at the convention as an opportunity “to show off” the city, which “represents what Joe Biden and Kamala Harris represent.”

“This is what it looks like when Americans vote for leaders who support hardworking families,” Pritzker said, citing “policies of a fair minimum wage, expanding voting rights, protecting civil rights and human rights, and standing up for the right to choose.”

Pritzker said the convention would bring “thousands of good-paying, labor-friendly jobs” and 50,000 visitors to the state. Lightfoot estimated it could generate $150 million to $200 million in spending in the local economy.

She also cited the city’s familiarity with large-scale events, along with its infrastructure, location and the state’s “unified leadership” as reasons Chicago should host the convention.

But the news conference came just four days before a contentious vote in which Democrats will choose the leader of the state party for the next four years. The post is currently held by Congresswoman Robin Kelly, of Matteson. She won that title in March 2021 over Pritzker’s preferred candidate, Chicago Ald. Michelle Harris.

Kelly was elected to replace former state House Speaker Michael Madigan, who stepped down last year after failing to gain another term as House speaker. He was the state’s party leader from April 1998 until February 2021.

The party’s state central committee, made up of 17 men and 17 women from the state’s congressional districts, is scheduled to vote Saturday in Springfield on whether Kelly would remain in charge of the party for another four-year term. Each committeeperson’s vote is weighted based on the number of Democratic ballots cast in the congressional district.

Because Kelly is a sitting congresswoman, she is unable to raise money for candidates in state races, although she has no restrictions on fundraising for federal races. While the party created a fundraising committee for state races, the fundraising issue remains a key point of contention. 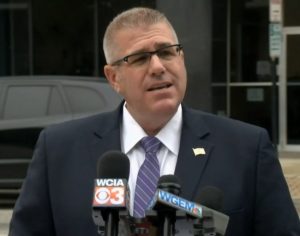 The latest campaign filings from the Democratic Party of Illinois’ state fund show it raised $1.72 million in the quarter ending June 30, $1.5 million of which was transferred from Pritzker’s campaign fund. The party’s state fund expended $10,424.47 for the quarter that ended June 30, excluding Pritzker-funded mailers. In the previous quarter, the DPI state fund spent $11,240.06. Its balance as of June 30 was $2.8 million.

But the party also maintains a federal fund registered through the Federal Election Commission, and DPI spokesperson Jake Lewis said the party has raised over $2 million since Kelly took over as party chair between the two funds, not including Pritzker’s transfers.

“Under Robin Kelly’s leadership, the Democratic Party of Illinois has been overhauled from top to bottom, with new staff and vendors, upgraded data and technology services, party organizers, an active communications shop, and more,” he said in an email. “Chair Kelly’s vision for the party is one that serves all Democrats across our state, beyond just one candidate or one caucus, and we will continue to move our party forward.”

“We encourage Democrats to focus on the issues that matter to the people of this state, like defending our fundamental rights and defeating Republicans in the November,” Lewis added.

Pritzker, meanwhile, is supporting state Rep. Lisa Hernandez, D-Cicero, an assistant majority leader in the state House who carried the recent congressional and state redistricting bills through the General Assembly.

“This means having a chair that can fundraise for all Democratic candidates,” Welch said in a statement.

Welch said Hernandez’s “vision” would be to create a new role for Kelly as “federal chair.”

“They can work in partnership to lead the party forward,” he said in the statement. “This is how we have Democrats be more supported as we face two Supreme Court races, dozens of legislative campaigns, and other races up and down the ballot.”

Welch said it is “critical” that the leader of the state party can raise and spend funds that support all Democratic candidates across the state.

“Right now, DPI does not and cannot do that. If a leadership change occurs, it will,” he said.

Kelly told NBC News she was “disappointed” in the lack of support from Pritzker, but she appeared alongside the governor and other members of Congress at the morning event Tuesday, and the governor downplayed intraparty tensions.

“Well, let’s be clear: We’re all standing here in unison standing up for a Democratic Convention for Chicago and for the state of Illinois,” Pritzker said.

“And I think as the Chair (Kelly) said so eloquently, after Saturday, we’re going to have a chair of the Democratic Party of Illinois, whoever that is, is going to serve a four-year term,” he added, noting Democrats would rally around the chair for the next four years.

Republicans, meanwhile, were dealing with intraparty tensions of their own as state lawmakers in the conservative Freedom Caucus called on the party to censure U.S. Rep. Adam Kinzinger, R-Channahon, for his role as an outspoken critic of President Donald Trump on the U.S. House committee investigating the Jan. 6 attack on the U.S. Capitol.

State Reps. Chris Miller, Brad Halbrook, Dan Caulkins, Adam Niemerg, and Blaine Wilhour – some of GOP governor candidate Darren Bailey’s closest allies in the Illinois General Assembly – called for the state party to censure Kinzinger and called the Jan. 6 hearings “a sham without any due process.”

The state party issued a statement saying it was “focused on uniting the party to defeat Gov. Pritzker in November and make Illinois a safe and affordable place for people to live.”

Bailey, at a news conference called to criticize the governor’s handling of the state Department of Children and Family Services, didn’t answer directly whether he thought Kinzinger should be censured.