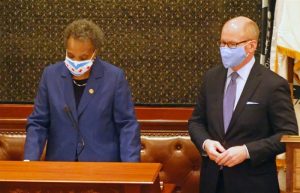 “Today, all over the country, electors just like us are fulfilling a constitutional duty to affirm the will of the people,” Chicago Mayor Lori Lightfoot, an elector who presided over Monday’s session, said after the vote. “Ladies and gentlemen, you have fulfilled a solemn and important responsibility for our democracy here today. The election is affirmed and it is now time for us as a country to move forward, transition in full, and embrace the promise of a new administration led by President-elect Joe Biden and Vice President-elect Kamala Harris. Their success is our success, and we need desperately to unite as a people. Our democracy and our residents deserve no less.”

“The next year has the potential to be one of the most difficult our country has ever faced,” he said in a statement after the vote. “We need leadership to beat this pandemic, provide economic relief, bridge deep divides and help our country grieve and heal from this unprecedented tragedy.”

The electors met in the Illinois House of Representatives chamber, a room large enough to allow social distancing among the electors and a handful of staff.

Biden and Harris won the popular vote in Illinois 58-41 percent over the Republican ticket, a difference of just over 1 million votes. That meant the Democratic Party’s state central committee was entitled to choose the electors. They included one from each of the state’s congressional districts and two at-large electors, Lightfoot and Harmon, representing the state’s two votes in the U.S. Senate.

Secretary of State Jesse White opened the ceremonial session and presided while electors chose a chairperson and vice chairperson. Lightfoot was named chair and Harmon was named vice chair.

One by one, each elector stepped to the front of the room and placed two ballots in a wooden box, one for president and one for vice president. Some also took the opportunity to speak before dropping their ballots in the box.

“As the elector of the 4th Congressional District it is with great pride, as a proud Illinoisan, a proud Chicagoan, proud American and Puerto Rican that I cast my vote for Joe Biden and Kamala Harris for president and vice president,” said state Sen. Omar Aquino, D-Chicago.

“I am so relieved to be casting my vote for Joe Biden and Kamala Harris, and they will be our president and vice president,” said District 6 elector Nancy Shepherdson.

After the votes were cast, each elector signed a certification of election. By federal law, copies of the certified vote will be sent to the president of the U.S. Senate, the national archives and the chief judge of the U.S. District Court for the Central District of Illinois, Sara Darrow. Additional copies are also maintained in the Illinois secretary of state’s office.

Congress will meet on Jan. 6 to count the ballots from all 50 states and the District of Columbia. Biden and Harris will be inaugurated at noon on Wednesday, Jan. 20.