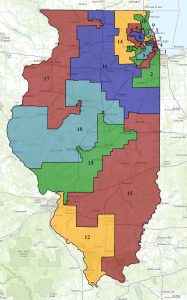 This is the Congressional district map for Illinois voters since 2013. (Courtesy of wikiwand.org)

SPRINGFIELD – The process of redrawing congressional district maps in Illinois got off to a slow start Thursday, Oct. 7 when only one person showed up to testify at the first legislative public hearing, which was held in Chicago.

Ryan Tolley, policy director for the advocacy group CHANGE Illinois, urged the House Redistricting Committee to listen to community groups and afford them more opportunity than they had during the legislative redistricting process to review any proposed new maps before they are voted on.

“I had trouble finding one group that participated in the legislative remap hearings that publicly endorsed the legislative maps. But there are a lot that rejected those maps,” Tolley said. “And I just want us to think about how can we have a map that reflects the interest of communities if almost every group that tries to engage with this process says their voices were ignored and their communities were harmed. Their efforts really should not be in vain.”

In May, and again in August, lawmakers drew new maps for state legislative districts. Those new maps are now the subject of two federal lawsuits — one by Republican leaders in the General Assembly and one by a Latino advocacy group — who argue, among other things, that the new districts dilute Latino voting power.

But lawmakers have not yet addressed the issue of congressional district maps, something required under the U.S. Constitution once every 10 years following the decennial census.

According to the 2020 U.S. Census, Illinois’ population fell by 18,124 people over the previous 10 years, or about 0.14 percent. As a result, Illinois will lose one of its congressional districts, bringing the number down to 17.

Meanwhile, there was a marked shift in the state’s overall population away from rural areas toward urban centers and the suburbs. The city of Chicago grew 2 percent, or about 50,000 people, McNamara said, although there were significant demographic changes within Cook County. The white population there declined by about 15 percent and the Black population fell by about 2 percent, but the Asian and Hispanic populations both grew substantially, she said.

Those changes will need to be reflected in whatever new maps lawmakers draw, something they are expected to take up during the fall veto session, which begins Oct. 19.

That process will be watched closely at both the state and national level. Democrats hold only an eight-vote majority in the U.S. House while three seats are vacant — two Democratic seats and one Republican seat.

Historically the party that holds the White House — currently, Democratic President Joe Biden — loses seats in the president’s first mid-term election, which means there is a strong possibility that Republicans could regain control of the House.

But Democrats are firmly in control of the Illinois General Assembly, where they hold supermajorities in both chambers, and they hold 13 of the state’s 18 congressional seats.

Because of the way Illinois’ population shifted in the 2020 census, the most likely region to lose a congressional seat will be in heavily-Republican southern Illinois. But Democrats in the General Assembly are expected to use their strong majorities to draw maps in a way that will help Democratic candidates in some of the state’s more toss-up regions.

“Illinois has a terrible history of drawing grotesquely gerrymandered districts for political power,” he said. “And it’s been done on a bipartisan level. The current map that we’re in, certainly the congressional district that I live in — the 13th congressional district — was no-bones-about-it drawn to try to elect a Democrat by linking together university towns from Champaign, Normal, Springfield, Edwardsille, across the state in a diagonal manner, where friends and neighbors get divided for pure political gain.”

That seat actually is now held by a Republican, Rodney Davis, who has indicated that he might consider running for governor in 2022, depending on how lawmakers redraw that district.

The next House committee meeting on congressional maps is slated for noon Tuesday, Oct. 12, at the Plumbers Local 130 United Association building in Joliet.