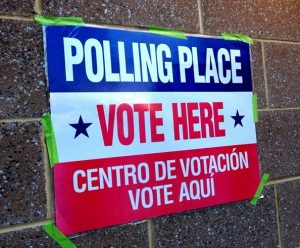 The Illinois Municipal League filed suit in July seeking a declaratory judgment stating that the law setting Nov. 3 as a state holiday did not apply to its members. (Capitol News Illinois photo)

SPRINGFIELD – A Sangamon County judge has ruled local units of government are exempt from a law the General Assembly passed this year declaring the Nov. 3 general election as a state holiday and requiring all government offices to be closed that day, unless they are used as polling places or for other election-related services.

Lawmakers passed that measure during their special session in May as a way to protect public safety during the election amid the COVID-19 pandemic. Specifically, it was intended to allow schools, colleges and universities to be used as polling places without exposing students to members of the public who might be carrying the virus.

The Illinois Municipal League, a nonprofit advocacy group that represents local governments, filed suit in July seeking a declaratory judgment stating that the law did not apply to its members. The case was filed on behalf of village of Bolingbrook, in Will and DuPage counties, and Southern View, in Sangamon County, against the Illinois State Board of Elections.

The plaintiffs challenged a portion of the law that reads, “All government offices, with the exception of election authorities, shall be closed unless authorized to be used as a location for election day services or as a polling place.”

If that applied to local governments, the plaintiffs argued, it would have forced many of them to pay tens, or even hundreds of thousands of dollars for holiday pay and related expenses for law enforcement officers, firefighters, other first responders and other staff who would be required to work on that day.

In a six-page opinion released Friday, Oct. 16, Circuit Judge Raylene Grischow ruled that if the law were applied to local governments, it would amount to an impermissible unfunded mandate.

“Where the Legislature fails to make necessary appropriations allowing reimbursement of expenses, local governments are not required to implement such mandates,” Grischow wrote.

She also cited transcripts of debate in the House over the bill, including a statement from Rep. Kelly Burke, D-Evergreen Park, one of the lead sponsors of the bill, who said upon questioning that the bill would not apply to local governments.

“We applaud the court’s decision to uphold the authority of local officials,” Illinois Municipal League executive director Brad Cole said in a statement. “Local leaders understand the needs of their communities and must be able to make decisions in their best interest. This decision allows them to do so in respect to Election Day. At a time when municipalities have experienced added public health costs and decreases in tax revenue, many simply cannot afford the extra costs this mandate would have created.”