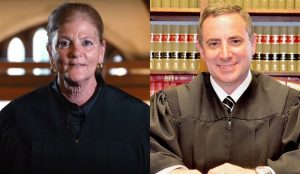 The race for the seat on the Illinois Supreme Court that represents 37 counties in southern Illinois is pitting a centrist Democratic candidate against a self-described “constitutional conservative” Republican.

Democrat Judy Cates, 68, and Republican David Overstreet, 54, are competing for a spot on the state’s highest court that is currently held by Lloyd Karmeier, a Republican who plans to retire from the bench in December.

Cates and Overstreet both serve on the 5th District Appellate Court – one of five state appellate courts, which are below the Illinois Supreme Court and hear appeals from circuit courts.

The losing candidate in November’s election will continue serving on the appellate court until his or her term ends.

The Illinois State Bar Association rated both Cates and Overstreet as “highly recommended.”

After graduating from Washington University School of Law in St. Louis in 1977, Cates worked as a prosecutor in the St. Clair County State’s Attorney’s Office. She spent about 30 years in private practice before she was elected to a seat on the 5th District Appellate Court in 2012. She was a founding partner of the Cates Law Firm in Swansea, but left the firm upon her appellate court election.

Cates, who grew up in Belleville, is the only woman to serve as president of the Illinois Trial Lawyers Association.

Overstreet, a Mount Vernon native, earned his law degree from the University of Tennessee College of Law in 1991. He has worked in small, private firms – in southern Illinois and Knoxville, Tennessee – until being appointed to the 2nd Judicial Circuit Court in 2007 by Karmeier, who Overstreet describes as his role model.

In an interview, Overstreet said identifying as a “constitutional conservative” means he believes in judicial restraint, and not inserting his own personal or political preferences into a decision.

“I do my best to go where I find that the law leads me,” Overstreet said. “I’m not running for Congress. I’m not running for the Legislature, so my policy preferences have no bearing on my decisions as a judge. And that’s what I mean by constitutional conservative.”

Though she is running as a Democrat, Cates said she dislikes that label.

When people ask her if she is a Democrat or Republican, she responds, “I don’t know,” Cates said.

“And when they ask me why, I tell them, ‘Because, I’m a Democrat with a gun,’ and then they laugh because the story down here is that if you’re a Democrat, they’re going to take your guns. Well, not if I’m a Supreme Court justice because I’m a hunter…So, I get past that pretty quickly when I talk to people,” Cates said in an interview.

Cates said she believes a major issue in this election is the selection of circuit court judges to fill judicial vacancies, which are generally filled by an appointment from the Illinois Supreme Court.

Although the entire Supreme Court votes to appoint new circuit or appellate judges, the court gives deference to recommendations from the justice who represents the district where the vacancy occurred.

If elected, Cates said she would recommend qualified and diverse candidates to the bench.

“Because what is not well understood by voters, is that the Supreme Court justice for your district selects judges whenever there’s a vacancy [in the district],” Cates said. “That’s why this whole race is going to be about how to select judges. What is the judiciary going to look like in 10 years? Are we just going to have more of the same, or are we going to have a bench that more fairly reflects southern Illinois?”

Overstreet said he would follow Karmeier’s approach to selecting circuit and appellate judges – a process that Karmeier used in 2007 to choose Overstreet.

He said Karmeier’s process involves appointing a committee of legal professionals, including attorneys and retired judges, to interview applicants for a vacancy. The committee would recommend a few candidates, and pass those recommendations to Overstreet, who would make the final selection, he said.

“As it relates to diversity on the bench, I am a firm believer that we need the most qualified judges but we certainly need a bench that reflects diversity, and that would include of course, men and women serving on the beach here in southern Illinois,” he said. “I would be appointing my fair share of females to the bench because there are certainly a great number of females who are qualified to serve the judiciary.”

For both candidates, the theme of law and order has also dominated this election campaign.

Overstreet has claimed the statewide endorsements of the Illinois State Rifle Association and the Illinois Fraternal Order of Police.

Cates touts endorsements from sheriffs in Jackson, Madison, St. Clair and Randolph counties, as well as her experience as a prosecutor.

“Law enforcement to me, as a former prosecutor, is very important to keep our community safe,” Cates said. “I know what criminals are like, and I know what that devastation does to a family. …I get it. I understand that.”

Overstreet acknowledged that he never tried a case before a jury while he was a private practice lawyer in Illinois, and he emphasized his role as a circuit judge in the 2nd Judicial Circuit.

“I am the only candidate in this race who has actually been a trial judge. As a trial judge for almost 10 years, I handled every type of civil, criminal, juvenile case and jury trials,” he said.

Combined, both campaigns have spent roughly $1 million – which pales in comparison to the $9.3 million total spent during Karmeier’s 2004 election contest against Democrat Gordon Maag.

Karmeier was the first Republican elected to the Illinois Supreme Court in the 5th District since the judicial districts were formed in 1964.

In 2005, Karmeier cast the deciding vote to overturn a $1 billion jury verdict against State Farm that was awarded in a 1999 case, Avery v. State Farm.

Years later, State Farm faced a federal class action lawsuit that alleged the insurance company illegally funneled money to Karmeier’s 2004 campaign. State Farm reached a $250 million settlement with the class of policyholders in 2018. The insurance company maintained the claims in the lawsuit were without merit, and the settlement was “made simply to bring an end to the entire litigation,” according to a State Farm news release at the time.

For his part, Karmeier has said he didn’t know who was funding his campaign. Cates said Karmeier should have recused himself from the State Farm case, adding that she already recuses herself from cases that involve her campaign contributors.

“If a case comes before me now, and I have a donor involved, I’ve already recused myself,” Cates said.

In Caperton, the Supreme Court was asked to decide whether a justice on the Supreme Court of Appeals of West Virginia should have recused himself from a decision that reversed a $50 million judgment against Massey Coal Co., after Massey’s C.E.O. donated $3 million to the justice’s campaign.

In a 5-4 decision, the Supreme Court held that Justice Brent Benjamin should have recused himself from the case because the campaign donation from Massey’s CEO represented a “risk of actual bias.”

Specifically, the court found that a serious risk of actual bias can occur “when a person with a personal stake in a particular case had a significant and disproportionate influence in placing the judge on the case by raising funds or directing the judge’s election campaign when the case was pending or imminent.”