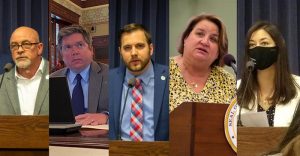 SPRINGFIELD – Four months before the general election, six incumbent state lawmakers appeared primed for an early rejection by voters based on unofficial tallies this week.

The longest-serving of the incumbents to lose their primary election was Democratic Rep. Mike Zalewski, of Riverside, a founding member of the House’s “Mod Squad” of moderate Democrats. He was unseated by a more liberal challenger, Abdelnasser Rashid, of Justice, who had the backing of the progressive group Our Revolution, which has roots in the 2016 presidential campaign of U.S. Sen Bernie Sanders.

It’s a race that Kent Redfield, a campaign finance expert and professor emeritus of political science at the University of Illinois at Springfield, called “stunning.”

Redfield calculated that Zalewski raised just over $1 million and about $96,000 was raised by associated independent expenditure committees. Rashid, on the other hand, raised $383,000 with his biggest contributor being family members at $60,000, according to Redfield’s analysis.

“I mean, there were issues within positions, a bunch of other things, but if you look at that money, that’s just stunning that you’ve got $1 million that he raised during that 18-month period,” Redfield said.

Zalewski was one of three incumbent House Democrats who were trailing in their elections this week. Election results won’t officially be certified until July 29, and some jurisdictions continue to await mail ballots which will still be accepted through July 12, provided they were postmarked as of election day.

While Redfield said it’s not unusual for incumbents to be unseated in a primary, usually those with establishment backing and big money donors end up prevailing. Mitigating factors this year, he said, were that every legislative district was redrawn with new decennial census data, and the fact that the House has a new speaker.

Emanuel “Chris” Welch, of Hillside, replaced former Speaker Michael Madigan in January 2021 after Madigan held the gavel for all but two years since 1983.

“You know, I don’t want to say, well, Madigan would have won it and Welch didn’t sort of thing,” Redfield said. “Because you can’t ever go back. Madigan, a couple of cycles ago, you’d be shocked.”

The ousting of the three Democratic incumbents wasn’t as shocking this year, he said, because Welch’s operation isn’t as “top-heavy” as Madigan’s was.

“I mean, part of that is, is it possible to do that? And secondly, do you want to do that?” he said of maintaining a level of control that Madigan had over House races.

And he said Rashid ran a successful grassroots campaign.

Rashid frequently attacked the seven-term incumbent on his vote against a measure repealing a parental notification of abortion requirement and for his ties to Madigan, who has been indicted on bribery and racketeering charges.

The Riverside-Brookfield Landmark newspaper quoted a Rashid election-night victory speech in which he said he would fight for the middle class, work to end corruption and that he was excited to be the General Assembly’s first Palestinian Muslim.

Zalewski, meanwhile, was no stranger to heavy lifts in the General Assembly, frequently carrying major revenue bills as well as a measure that would have set the rates of a graduated income tax structure had it not been rejected by voters.

That district, the 21st, encompasses a long stretch of the southwest Chicago suburbs, stretching from the Berwyn area in the north to the Bridgeview area in the south. Rashid’s margin of victory was about 320 votes, unofficially as of Friday, although Zalewski conceded on election night.

“I loved this job, gave my all for the people of the district and the state, and did it the best I could,” he said in a social media statement. “The voters of the district made their voices heard, and that’s democracy.”

Rashid’s general election opponent will be Matthew Schultz, who the Landmark reported is a 26-year-old from Brookfield who works for the anti-tax group Taxpayers United.

In the 77th District, which includes O’Hare Airport and the suburbs of Northlake and Addison, incumbent Democrat Kathleen Willis trailed challenger Norma Hernandez by about 200 votes as of Friday.

Hernandez had the backing of progressive U.S. Congressman Jesus “Chuy” Garcia, as well as powerful labor unions such as the Mid America Carpenters Union and the Chicago Laborers’ District Council.

Willis was a member of Madigan’s leadership team who ultimately opposed Madigan’s reelection as speaker in 2021, helping to end his historic run. While she was not named to leadership under Welch, he did campaign for Willis during the primary race. Willis was the sponsor of gun dealer licensing legislation that became the first bill signed by Gov. JB Pritzker.

Fundraising was about equal in that race, with Willis raising $330,000, including $76,000 from teacher unions, $100,000 from other elected officials’ candidate committees and $63,000 from Democrats for the Illinois House.

Hernandez raised $316,000 with $86,000 raised by independent expenditure committees that were working in her favor. She received $120,000 from organized labor and $133,000 from other elected officials’ committees, according to Redfield’s analysis.

The Republican candidate in the district is Anthony Airdo, of Melrose Park, who lost to Willis in the district’s old boundaries in 2020 by a margin of about 44 percentage points.

The Gun Violence Prevention PAC claimed the apparent unseating of incumbent Denyse Wang Stoneback as a victory in the 16th District.

“Rep. Stoneback failed her constituents when she worked against and refused to vote for life-saving legislation that would require universal background checks for all gun sales and provide funding for mental health,” Kathleen Sances, president and CEO of GPAC, said in a statement.

Kevin Olickal, a Skokie Democrat who had a lead of about 640 votes over Stoneback as of Friday, also had the backing of U.S. Rep. Garcia, as well as his state senator, Ram Villivalam, of Chicago. Billed on his campaign website as a “true progressive,” Olickal is currently working part-time toward his juris doctorate at Loyola University Chicago School of Law School.

The Republican candidate in the northside Chicago-area district is Vince Romano, also of Skokie. He ran unsuccessfully for the district under its previous boundaries in 2012 against former Madigan lieutenant Lou Lang, garnering just 32 percent of the vote.

The Senate Democrats lost one incumbent to a primary challenger, although Eric Mattson had only been in the Senate since May. He had replaced John Connor, a Will County Democrat who left the chamber in a bid to become a judge, in the 43rd District.

Mattson was beaten by Will County board member Rachel Ventura by more than 1,800 votes. Ventura’s campaign page describes her as “pro-ethics, no strings attached,” and as a “progressive Democrat” who is dedicated to fighting the wealth gap.

On the GOP side, Diane Harris, who received backing from the Senate Republican Victory Fund – the campaign apparatus for establishment Senate Republicans – held a lead over her challenger by about 120 votes as of Friday. Her opponent was Michelle Lee, a further right candidate whose focus was education policy with a stated goal of banning critical race theory in Illinois schools.

Two House Republican incumbents lost in their primaries as well.

Mark Luft, a House Republican and mayor of Pekin, had the backing of over $59,000 from the campaign account of House Minority Leader Jim Durkin and $268,000 from organized labor. He lost by more than 3,000 votes to the son of a retired state senator in the 93rd District. All told, Luft raised $463,000.

Travis Weaver, the victor in that race, was backed by the GOP nominee for governor, state Sen. Darren Bailey. Weaver’s dad, Chuck Weaver, served in the Illinois Senate from 2015 through January 2021.

No Democrat ran in the western Illinois district that runs from Geneseo to the north to the Pekin area.

In the 75th House District, David Welter, a Morris Republican, was defeated by Jed Davis, a more conservative challenger from Newark who also had Bailey’s backing.

Welter was one of the House GOP’s more effective bipartisan lawmakers, having most recently voted for the Climate and Equitable Jobs Act, a massive energy overhaul which helped secure the future of the nuclear plants in his district.

Welter was bested by about 1,000 votes in the district that includes suburbs such as Yorkville and Oswego. He had raised $663,000, including $205,000 from organized labor and $40,000 from the state Republican Party.

Davis raised just $48,000, including $6,000 from Bailey supporter and GOP megadonor Richard Uihlein, and $15,000 from the Restore Illinois PAC, which also supported Bailey.

No Democrat filed to run in the district.