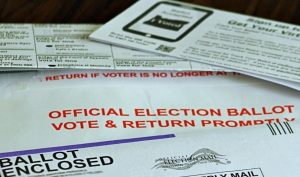 The bill would allow local election authorities to continue the use of curbside voting during early voting or on Election Day as was used during the Nov. 3, 2020 election.

SPRINGFIELD — The House Executive Committee advanced an election bill that would make permanent some of the expansions to mail-in voting that were passed for the 2020 general election.

Lawmakers approved those measures last spring for the 2020 election in order to accommodate concerns about voting in-person during the COVID-19 pandemic. But those earlier expansions of mail-in voting expired on Jan. 1.

The bill’s sponsor, Rep. Katie Stuart, D-Edwardsville, said those vote-by-mail provisions were successful in the 2020 general election and should continue in the upcoming consolidated elections. The consolidated primary election is scheduled for Feb. 23.

“This will be permanent because our election authorities who chose to use it found it was successful,” Stuart said.

The bill would also allow local election authorities to continue the use of curbside voting during early voting or on Election Day.

It would not require local election offices to mail or email vote-by-mail ballot applications to voters who cast a ballot in previous elections. This measure was included in the previous vote-by-mail law for the 2020 general election but will not be extended.

In order for a ballot returned to a drop-box to be counted in an election, it must be returned before voting closes on Election Day.

Some Republicans on the House Executive Committee said the bill’s requirement that the state Board of Elections provide guidance, rather than rules, for securing collection sites does not go far enough to provide security.

Rep. Tim Butler, R-Springfield, who raised similar concerns about the previous vote-by-mail bill, said the bill should require the Illinois State Board of Elections to create rules for drop-box security.

“I think this is important for election integrity, and for people to know that in this state when they drop off the ballot, that nothing is going to happen. And I think we as the Legislature need to give an executive branch agency with oversight of our elections much more clarification as to how these boxes should be built,” Butler said.

The bill, Senate Bill 145, moved to the full House floor, with Democratic committee members voting in favor and Republican members voting against it.