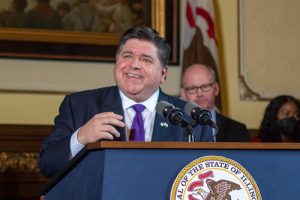 It’s the latest quarterly poll from the firm, and data included 14,258 registered voters polled from April 1 through June 30.

While it’s a truism of polling that any poll is just a “snapshot in time,” Pritzker’s numbers have been remarkably consistent in the Morning Consult measurements since January 2021. His approval has ranged from 50 to 51 percent while disapproval ranged from 43 to 44 percent.

President Joe Biden’s approval rating in Illinois as measured by the same firm, however, is an example of how quickly public sentiment can change.

It was a major drop from one year prior for Biden, who logged a healthy 58-38 approval-disapproval rating in Illinois for the quarter ending in June 2021.

The discrepancies between the approval ratings of Biden and Democratic governors help explain the level of intrigue in national news outlets regarding Biden potentially being replaced atop the Democratic ticket in the 2024 election cycle.

Pritzker’s name – along with California Gov. Gavin Newsom, who had a 53-40 approval split according to the poll – has been floated time and again in that conversation. Many news outlets, including Capitol News Illinois, have asked him about his plans should Democrats seek a new presidential candidate next time around. 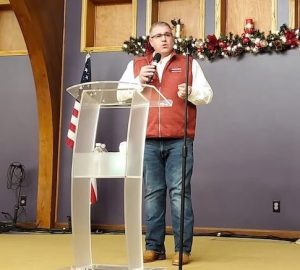 He hasn’t directly denied an interest in a presidential run, but he told me at the end of June that Illinois remains his focus.

“I’m not talking about running for president. I’m talking about running for governor,” Pritzker told me in a one-on-one interview after the June 28 primary. “And it’s what I’m focused on. I really do believe that, you know – I love this state – and I love the job that I have. I believe there’s a lot more to get done. I mean, you wouldn’t look at me and say that Illinois doesn’t have more to get done.”

The intrigue has also been largely stoked by the governor’s recent speaking engagements.

In June he spoke at a gathering of Democrats in New Hampshire, normally one of the country’s first states to hold a primary, and last weekend he spoke at Florida Democrats’ Leadership Blue gala.

The Florida speech took an unapologetic tone, championing progressive policies passed in his first term in Illinois while also focusing on abortion rights and gun control.

It also included a faux “apology” from the governor to Floridians for defeating ex-Gov. Bruce Rauner by nearly 16 points in 2018, a win Pritzker said caused Rauner to move to Florida in “humiliation,” according to prepared remarks reported by Politico.

Pritzker also mentioned Ken Griffin, the Republican megadonor and founder of the hedge fund Citadel, who spent $50 million in an unsuccessful effort to nominate Aurora Mayor Richard Irvin in the GOP primary. Pritzker dedicated millions of his own personal fortune to attack Irvin.

Pritzker likened Griffin to a “spoiled rich kid” for announcing Citadel’s move to Florida amid Irvin’s primary struggles, and he attempted to tie the self-styled GOP moderate wing, as well as Florida Gov. Ron DeSantis, to former President Donald Trump.

“The funny thing is that both Rauner and Griffin claim they don’t come from the Donald Trump wing of the Republican Party,” Pritzker said. “Instead they would say they’re DeSantis Republicans – which is a little bit like saying you’ve never been a fan of Darth Vader but you support the Empire’s political agenda.”

Within days of returning home from Florida, Pritzker announced a positive test for COVID-19 Tuesday, and his team said he was experiencing mild symptoms. Prior to the Florida trip, he spent time at the White House last week and in Augusta, Maine, at a gathering of the National Governors Association.

State Sen. Darren Bailey, the Xenia farmer who gained the GOP nomination and has vowed not to be outworked in the race for governor, saw Pritzker’s recent East Coast trip as a line of attack.

“Gov. JB Pritzker spent the weekend hobnobbing in Florida with wealthy liberals and fueling his presidential ambitions,” Bailey’s campaign said in a Monday news release. “Meanwhile in Illinois, rampant crime continued unabated. Seven people were killed over the weekend in Chicago, and eight carjackings terrorized Chicago neighborhoods in the span of just one hour.”

Bailey’s battle will be uphill on the fundraising front as he looks to knock off the incumbent, who is partial heir of the Hyatt hotel fortune and has a net worth of $3-4 billion.

Bailey’s main financial backer has been Richard Uihlein, founder of the shipping supply company Uline, having donated $9 million to the candidate and $8 million to other political action committees working on Bailey’s behalf during the primary. Uihlein gave another $5 million to the pro-Bailey People Who Play By the Rule PAC on July 6.