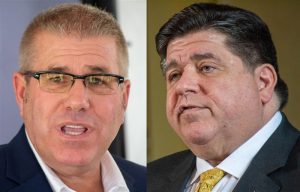 The debate, in the studios of WGN-TV in Chicago and carried statewide in all other television markets, came as polling showed Pritzker, a billionaire heir to the Hyatt Hotel fortune, with a commanding lead over the southern Illinois farmer and lawmaker. Campaign finance reports also showed the incumbent with a huge funding advantage, mostly from his own wealth.

Bailey continued hammering Pritzker over issues including crime, education and state spending while Pritzker continued to cast Bailey as a conservative extremist who criticizes the state but has no plan for how to solve any problems.

Throughout the campaign, Bailey has frequently criticized Chicago for its high crime rate, its history of corruption and its underperforming schools, at times calling it a “hellhole” and comparing it to the OK Corral. He continued those assaults Oct. 18 and said Pritzker was directly to blame for those problems, although he didn’t directly respond to the moderator’s question as to what his plan would be to solve them.

“I’ve got a new name for Chicago. I’m gonna call it Pritzkerville because every one of Gov. Pritzker’s extreme policies are destroying the city,” Bailey said. “Out of control crime, devastated education, the fact that corporations are packing up and leaving every day.”

Pritzker, meanwhile, defended his first term in office by highlighting his fiscal management, legislative policy agenda and his responses to the COVID-19 pandemic.

“After years of mismanagement, I’ve balanced four budgets in a row, paid off all the state’s overdue bills, gotten six credit upgrades. And that’s allowed me to provide $1.8 billion in gas, grocery, property and income tax relief for working families,” he said. “I’ve also raised the minimum wage to a livable wage, and I protected a woman’s right to choose. And I did all that while fighting a deadly global pandemic, saving lives and livelihoods. I’ve done my job.”

Oct. 18’s debate came one day after the Illinois Broadcasters Association released a new poll showing Pritzker with a 22-point lead in the race among registered voters. The political handicapping website FiveThirtyEight, which aggregates data from multiple polls, estimates his average lead across those polls at 15.7 percentage points.

It also came on the heels of the latest quarterly campaign finance reports that showed Pritzker, who is largely self-funding his campaign, spending $38.5 million over the previous three months compared to Bailey’s $1.6 million.

Much of the debate focused on crime, particularly in Chicago’s lower-income and minority neighborhoods, something Bailey blamed on the nation’s immigration system.

He went on to criticize Chicago’s status as a sanctuary city while saying Pritzker and Chicago Mayor Lori Lightfoot “seem perfectly fine on all of this rampant crime.”

Pritzker responded by saying his administration is the first in nine years to fund the gang crime witness protection program and that he has also increased funding for the state police and upgrading its DNA laboratory. But he also said high crime rates are not unique to Chicago.

“Look. There’s no doubt during COVID we’ve seen crime increase all across the nation, and Chicago and the rest of the state (are) no exceptions,” Pritzker said. “But we’ve got to stand up for our state police, invest in police. Darren Bailey voted against all of those things. He’s got no plan.”

The two also sparred over the SAFE-T Act, the sweeping 2021 criminal justice reform law that includes a provision that will end cash bail starting Jan. 1, 2023, replacing it with a system in which the decision to detain people in jail while they await trial is based on factors other than their ability to post bond.

“His SAFE-T Act is going to let prisoners out of jail. It’s a revolving door on all of our jail cells across Illinois,” Bailey said.

But Pritzker fired back by saying, “The criminal justice system that Darren Bailey and Republicans are standing up for is one that allows murderers and rapists and domestic abusers to buy their way out of jail.”

Bailey has been a frequent critic of increased state spending under the Pritzker administration and has suggested the budget contains tens of billions of dollars of wasteful spending, although he has offered few specific plans other than getting rid of “waste” in state agencies. He has also said he would use “zero-based budgeting,” a term that generally means requiring agencies to justify every dollar they spend rather than basing budgets on prior years’ spending.

On Oct. 18, though, he identified public school spending as one area in which the state could make significant cuts.

“What I stand for is getting rid of the administrative bloat that exists in our schools,” he said. “Chicago public schools spend $29,000 per student in their failed education. And Gov. Pritzker wants to give them more money. We have got to hold our schools and our spending accountable.”

Pritzker, however, pointed out that cutting state spending would result in increases in local property taxes, which are the primary source of funding for public schools. And he attacked Bailey for establishing a private, religious school in southern Illinois that uses textbooks from a controversial publisher.

“He shouldn’t be let anywhere near education policy or education funding,” Pritzker said. “He runs a school that teaches kids that women are inferior to men and that slave owners were good to their slaves.”

That prompted Bailey to interrupt and say, “that’s too far.” But Pritzker was given time to continue.

“The fact is that Darren Bailey has proven that he would be dangerous for our kids, for parents, for communities if he were put in charge of public education,” he said. “We need to make sure that he doesn’t come anywhere near the governor’s office.”

Bailey then responded to the governor’s charges.

“That school is not political to me, and I’m not bringing it into this campaign,” he said. “And I don’t know where that’s at if it was ever in that curriculum, but it is JB Pritzker who’s bringing CRT issues and cultural issues into our schools.”

CRT, short for critical race theory, references an educational framework aimed at analyzing the role race plays in the legal system and American history, but it is not required in Illinois law or statewide curriculum.

Since the U.S. Supreme Court overturned Roe v. Wade earlier this year, giving states more leeway to regulate abortion, reproductive rights have become a central issue in campaigns across the country, including in Illinois where access to abortion was declared a “fundamental right” in the 2019 Reproductive Health Act.

Bailey has been an outspoken opponent of abortion, and Pritzker has frequently called him an extremist on the issue, suggesting Bailey would seek to impose a ban on the procedure.

But Bailey has denied that and said Oct. 18 that it would be a “fool’s errand” to pursue such a policy through the Democratic-controlled General Assembly.

“The state for 30 years, Democrats have had a stranglehold on our legislative process,” he said. “I’ve told people time and time again, I commit to unifying. …” He was then interrupted several times by the moderator who insisted on firm commitment, to which Bailey said, “It’s not going to happen.”

“Darren Bailey wants to ban abortion in Illinois,” Pritzker said. “He wants to jail doctors and jail women who are seeking to exercise their reproductive rights. I have stood my whole life for women exercising their rights, especially their reproductive rights. We’ve got to make sure that Illinois is a haven for women all across our state so that they can exercise those rights and make sure that their doctors are not in prison, either in Illinois or anywhere else in the nation.”