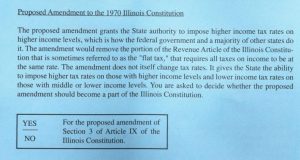 The graduated tax question as it appears on the Nov. 3 ballot for all Illinois voters.

During a news conference announcing $140 million in grants to qualifying heath care centers impacted by COVID-19 pandemic, Gov. J.B. Pritzker on Friday, Sept. 25 took a number of questions regarding the proposed constitutional amendment on the November general election ballot that would allow Illinois to levy a graduated income tax.

Earlier in the day, House Republican Leader Jim Durkin, of Western Springs, and Deputy Leader Tom Demmer, of Dixon, held a virtual news conference accusing the Pritzker administration of threatening a massive tax increase across the board if voters do not approve the amendment.

That was based on comments that Lt. Gov. Juliana Stratton had made the previous day, but Pritzker said Republicans were taking those comments out of context.

Pritzker repeated the argument he has often made that the state of Illinois was suffering from a structural budget deficit, even before the pandemic, and he said there are only a certain number of ways to address that.

One, he said, would be to raise the current flat rate by a full percentage point, to 5.9 percent. Another would be to cut state spending by 15 percent across the board, which he said would result in large property tax increases statewide to fund public schools.

The third choice, he said, is the proposed amendment that would raise taxes on people earning more than $250,000, about 3 percent of the state’s population, while leaving tax rates the same or cutting them for the other 97 percent.

“And the best direction that we should go to deal with this is to make sure that we’re asking those who are most able to step up to pay to do so – those are the wealthiest in our state … and that’s the direction that I think we ought to go. And that’s what the lieutenant governor was talking about.”