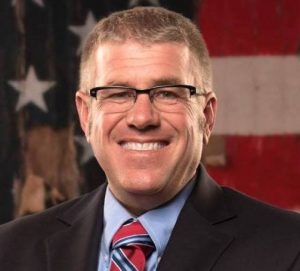 Speaking before a crowd of supporters at the Thelma Keller Convention Center in Effingham Monday night, Bailey cast himself as an outsider candidate who would stand up to who he referred to as “political elites”.

Bailey, a downstate Republican from Xenia, filed a lawsuit against the Pritzker administration in May challenging the governor’s executive orders issued amid the COVID-19 pandemic.

Pritzker referred to the suit as “a cheap political stunt” at the time. Bailey received a favorable ruling in that case from a judge in Clay County that was later thrown out by a Sangamon County judge.

Bailey was elected as a state representative in 2018 before winning election as state senator for the 55th District in November. During the General Assembly’s abbreviated session last spring, Bailey was removed from the house floor at the Bank of Springfield Center for refusing to wear a mask. In subsequent session days he obeyed the mask mandates and was not removed.

Since then, Bailey has toured the state and held rallies calling on Pritzker to lift restrictions on businesses and raising other issues.

According to his campaign website, Bailey is a third-generation farmer and a graduate of Lake Land College.

Bailey and his family co-founded Full Armor Christian Academy, and Bailey served for 17 years on the North Clay Unit 25 Board of Education in Louisville before his election to the General Assembly in 2018.

Speaking before a mostly unmasked crowd Feb. 22, Bailey said his campaign would be a “grassroots movement.”

“The days of putting the interests of the corrupt political class above the people is over,” he added.

Bailey criticized Pritzker and former House Speaker Michael Madigan, placing blame on them for causing residents to move out of state.

“Our family and friends are leaving because of high taxes,” Bailey said. “Governor Pritzker and the Illinois Democrats, they failed us, and it’s time to stop it.”

Bailey also offered criticisms for the Republican Party, saying “the political elites of both parties have failed us.”

“Republicans and Democrats have worried more about the donor class than they’ve worried about the working class, and friends, that ends now,” Bailey said.

Bailey touted a campaign platform based on strict fiscal conservatism, calling for “a budget that freezes spending with no tax increases.”

“We’ve got to stop passing budgets that spend dollars without an honest review of each spending item,” Bailey said.

Bailey proposed what he referred to as a “zero-base budget ideal,” in which state departments would not be guaranteed any part of the state budget, saying instead that departments would be required to “make their case for every dollar in funding.”

Pritzker responded to Bailey’s criticisms in an unrelated Tuesday, Feb. 23 news conference, saying that outmigration from the state has been a problem since before he took office, and that he has been working on creating programs to encourage students and workers to remain in Illinois.

Pritzker also expressed concern over the lack of masking and social distancing at Bailey’s campaign announcement.

“I heard that announcement last night was in a room of hundreds of people and no one was wearing masks,” Pritzker said. “So I am concerned about a super spreader event being caused by someone who’s running for governor.”

At the event, Bailey was also endorsed by U.S. Rep. Mary Miller and her husband, state Rep. Chris Miller, both of Oakland.

Bailey joins former state senator Paul Schimpf and businessman Gary Rabine as the currently declared candidates in the Republican primary. The primary is scheduled for March 15, 2022.