Illinois saw some of its highest voter turnouts for any election, especially a midterm election, on Nov. 6 with more than 50 percent of registered voters statewide coming out to cast ballots.

One of the country’s most watched races saw Republican Mike Bost (R-Murphysboro ) held off a challenge from St. Clair County State’s Attorney Brendan Kelly in the Illinois 12th Congressional District on Nov. 6.

The Democrats were hoping to flip the seat, but Bost got a boost from President Donald Trump who made an appearance there in the district on Nov. 3.

The Kelly campaign itself spent more than $3 million, the Bost campaign spent $2.3 million through Oct. 17, according to Federal Elections Commission records.

Davis was endorsed by state or local affiliates of several labor and professional groups.

The Republicans sent in the heavyweights late in the campaign, when  Vice President Pence spoke at a private Davis fundraiser Oct. 12, at a Springfield country club. House Speaker Ryan held a closed-door meeting with Davis supporters in Edwardsville on Oct. 23.

Londrigan also was supported by locals or political action committees of several labor groups. She, too, picked up key endorsements from former President Obama and Senators Dick Durbin and Tammy Duckworth, U.S. Sen. Kirsten Gillibrand of New York and other Illinois office holders.

Voters give nod to CARD dissolution

Voters in both Madison and Randolph counties expressed support for the establishing of countywide gun sanctuaries, with nonbinding advisory questions on the Nov. 6 general election ballot. 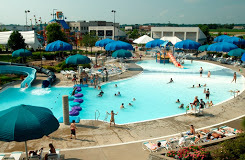 The Collinsville Parks and Recreation Department took over operation of Splash City Water Park and the activity center on Oct. 1.  (Photo courtesy of CARD)

While about 30 Illinois communities have formally declared themselves gun sanctuaries since the Illinois General Assembly began considering new gun regulations last year — Madison and Randolph counties are generally believed to be the first jurisdictions in the state to put the issue to a public vote.

The Madison County gun sanctuary — which would bar enforcement of any new state fair arms regulation in the county — was approved on a two-to-one vote of Yes: 67,351; No: 33,160.

The Randolph County referendum — which asked if the county should “become a sanctuary county for law abiding gun owners to protect them from unconstitutional law passed by the Illinois General Assembly” — was approved on a Yes: 9,835 – No: 1,970 vote.

County officials who spoke with the Chronicle emphasized last week’s referenda were strictly advisory in nature and do not legally authorize gun sanctuaries in the counties.

County board members will now review the result of the voting.

The gun sanctuary question was one of a trio of non-binding advisory questions on the ballot in Madison County during last week’s general election.

In a second nonbinding referendum, Madison County voters expressed support of the elimination of the county office of recorder of deeds office. Supporters of the measure cite potential cost savings. It was approved on a Yes: 63,548 – No: 34,243 vote – with a target date of Dec. 7, 2020 for elimination of the office.

Drawing overwhelming support was a third nonbinding proposal to require an advisory referendum for any Madison County government action that would incur bonded indebtedness. It was approved by a 10-to-one vote of Yes: 91,473 – No: 8,341.

Voters in the Collinsville Area Recreation District (CARD) – which spans portions of Madison and St. Clair counties — formally voted to dissolve the financially troubled district last week on a vote of Yes – 11,380; No – 2,833.

However, most of the district’s recreational facilities — such as the Splash City Water Park, CARD Activity Center, and Willoughby Farm — at to remain open under the new ownership of the City of Collinsville or other local government entities.

Immediately following the vote, on Nov. 8, the CARD district board met to discuss disposition of the district’s remaining assets, distribution of remaining funds, staffing and administration during the dissolution period, and litigation issues.

The Collinsville Parks and Recreation Department took over operation of Splash City Water Park and the activity center on Oct. 1.  Patrons are now being directed to the department’ website for information on events and classes.

Results of other ballot issues across the Metro East:

— Fosterburg Water District residents voted to require district board members be elected rather than appointed – in a lopsided vote of Yes: 2,823 – No: 449.