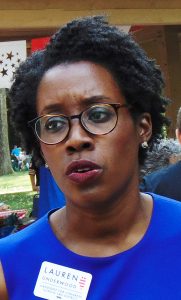 A novice politician given little hope of any success just a month ago has defeated four-term incumbent Congressman Randy Hultgren in the northwest suburban 14th District race.

Lauren Underwood, a 31-year-old who grew up in Naperville, held a 8,500-vote lead with 94 percent of precincts reporting. A registered nurse who also suffers from a heart condition, made health care policy a centerpiece of her campaign.

As recently as 30 days ago, Underwood trailed Hultgren by four points in polls. But in a poll released Saturday, she was up four points.

“Look at what we built together,” Underwood told supporters Tuesday night. She graciously praised Hultgren for his contributions to the district.

Underwood invoked the name of the first black woman congressman, Shirley Chisholm, and the legendary legislator’s motto, “Unbought and unbossed.”

“I’ve adopted that declaration as my motto,” she told her supporters. “I am wholly responsible to her constituents. Unbought and unbossed.”

Underwood also touted economic justice for all citizens, writing in a questionnaire, “Economic growth must touch all of our families — not just the wealthiest Americans.”

Hultgren, 52, made a concession speech at 10 p.m. after the Associated Press declared Underwood the winner.

Underwood, who had never run for elective office before, becomes both the first woman and first African-American to represent the 14th District, which covers Naperville and parts of DeKalb, DuPage, Kane, Kendall, Lake, McHenry and Will counties.