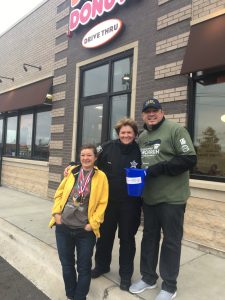 Dunkin’ Donut Cop on Rooftop May 19 was the 15th year in a row where police officers across the state appeared on Dunkin’ Donuts rooftops to benefit Special Olympics Illinois.

Every police department in McHenry County had a Dunkin’ Donuts partner this year.

In McHenry County, police officers staked out rooftops in Algonquin, Cary, Crystal Lake, McHenry, Fox Lake, Fox River Grove, Huntley, Lake in the Hills, and Woodstock. Many special Olympians, like Coral Brady, joined the event to help raise funds and bring awareness to the cause. Brady is an employee at the nearby Jewel grocery store.

“I do this for Special Olympics, and to support my police officer 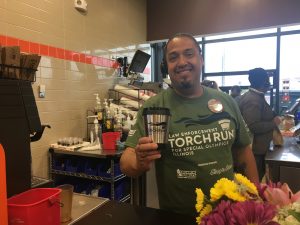 This event has been a huge success over the years. Nearly $2.3 million has been raised during this great partnership. In 2016, Huntley and Cary police departments were in the top 25 fundraisers for the Cop on a Rooftop campaign.

Everyone who visited a Cop on a Rooftop store and made a donation to the Torch Run received a free doughnut. Individuals who donated at least $10 got a Law Enforcement Torch Run travel mug and a coupon for a free medium coffee. Torch Run T-shirts and hats were available for purchase, with proceeds going to the cause. 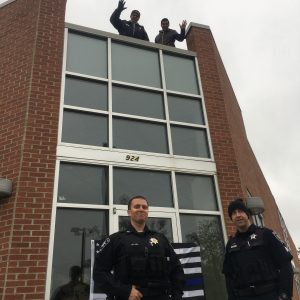 Officer Kathy Eiring, 49, of the Cary Police Department became involved in the annual event 11 years ago, just three years after she joined the CPD.

“I was kind of the low person on the totem pole,” said Eiring. “And I just fell in love with it.”

According to Eiring many Explorers volunteer their time for the “Cop on a Rooftop. “It’s so rewarding to see some of the kids I mentored become police officers.”

Filipe Crespo volunteered for the first time this year. He works at the nearby Thornton’s gas station and donated his day off to volunteer.

“I love Cary Policemen,” Crespo said. “They take care of the community.” He pledged to volunteer again next year.

In nearby Fox River Grove, Officer Eric Wartrovich proclaimed, “Pound for pound Fox River Grove Police Department is the most well-earning department for Cop on a Rooftop.”

Wartrovich pointed out that Fox River Grove has a population about a quarter of the size of Cary.

“We have an excellent location,” he said. “People here are very generous.”

In 2016, 195 locations participated in “Cop on a Rooftop” and raised more than $542,000. Dunkin’ Donuts visitors may purchase Special Olympic coffee mugs, T-shirts, and pins. They may also sign up for the annual Torch Run and purchase Torch Run merchandise.

Approximately 3,000 officers representing every branch of law enforcement across the state from local police officers to FBI agents will carry the Flame of Hope nearly 1,500 miles, running through thousands of Illinois communities via 23 different legs (routes) to its final destination — the Opening Ceremony of the Special Olympics Illinois Summer Games in June in Normal.

The Law Enforcement Torch Run has selected “Guarding the Flame Since 1986” as the theme for 2017. The event raised more than $43 million over its 31 years. Beginning June 4, law enforcement throughout Illinois will carry the Flame of Hope nearly 1,500 miles, running through hundreds of communities via 23 different legs (routes).

The Flame of Hope will ultimately be delivered to Bloomington-Normal for the Opening Ceremony of the Special Olympics Illinois Summer Games on June 9.