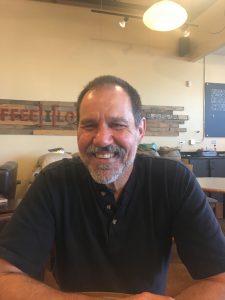 Inspired by Bill Clinton’s book, “Giving, How Each of Us Can Change the World,” Scott Neumann decided one way he could give people a chance to live their dream is to provide guitar lessons. (Photo by Adela Crandell Durkee/for Chronicle Media)

Mail carrier Scott Neumann knew he wanted to do something after he retired, but wasn’t sure what.

Then a friend asked him if he could tune his daughter’s guitar. That led to lessons. Before long, word spread and his fledgling avocation began to grow.

That led to Free Guitars for Future Stars.

Inspired by Bill Clinton’s book, “Giving, How Each of Us Can Change the World,” Neumann decided one way he could give people a chance to live their dream is to provide guitar lessons.

“Sometimes the program is not about the guitar,” said Neumann. “Sometimes kids just need an outlet.”

A guitar player since he was 8 years old, Neumann recognizes the importance of a good teacher. Free Guitars for Future Stars provides lessons for McHenry County children between the ages of 10 and 17 who are from lower-income families. The children

committed enough to learn 18 notes go home with a new guitar of their own and a chance to take additional lessons at a local music store at a reduced price.

He credits Ed Hall for teaching him that lesson. Hall, a now deceased board member and fundraiser realized that just being in a class and getting exposed to music was often enough for some of the children. 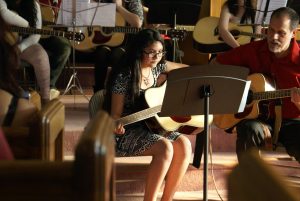 Scott Neumann (right) works with one of the students of Free Guitars for Future Stars. (Photo by Adela Crandell Durkee/for Chronicle Media)

Ed Hall held guitar nights every Christmas and invited National Finger-picking champions to perform. Some of Neumann’s students performed at Stage Left before, during and after Hall’s concert.

Through that program, Muriel Anderson, a renowned harp guitarist, became aware of the Free Guitars for Future Stars program. Anderson brought Neumann on stage to talk about program at her Thanksgiving concert in Woodstock. The group subsequently applied for and received a grant from Music for Life Alliance, founded by Anderson.

Neumann and his group expanded their lessons to veterans in the TLS Veterans program, children in the Home of the Sparrow program, and students attending a McHenry County “safe” school, Evergreen Academy. These programs offer used guitars donated to the organization.

Neumann relies on grants and donations to handle the expenses of a nonprofit organization and to pay for guitars and music supplies. He works at Home of the Sparrow to supplement his retirement income. Most recently Free Guitars for Future Stars received grants from Mockingbird Foundation (through the band FISH), The McHenry County Community Foundation, and Willow Springs Foundation.

“Every time I open the checkbook and wonder where will we get the money to make ends meet, we get a grant or a donation,” said Neumann. “Things somehow fall into place.”

The next fundraiser is from noon to 4 p.m. Oct. 22 at Raymond’s Bowl in Johnsburg.

Jack Wilson, the current National Finger-picking Contest winner and the guitar duo, Sweet Land will be there to perform, as well as current and former students.

The event offers beer tasting. There is no entrance fee, but anyone is welcome to donate. McHenry County Community Foundation pledged to match up to $5,000 in donations collected by Free Guitars for Future Stars. For more information visit the website www.fg4fs.org or call (815) 975-7989.

–Free Guitars for Future Stars started with a simple lesson–