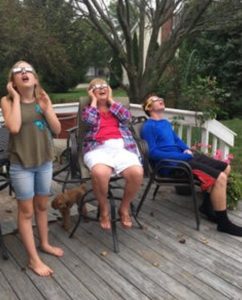 “Seeing a partial eclipse bears the same relation to seeing a total eclipse as kissing a man does to marrying him,” wrote the American writer Annie Dillard in her 1982 essay, “Total Eclipse.” Some who read Dillard’s essay in preparation for the 2017 eclipse, followed her siren call.

Libraries around McHenry County, and beyond, ran out of solar eclipse glasses a week or so before the event.

Children and teachers stepped outside to partly cloudy skies, equipped with certified glasses, welder’s masks, pin-holes through cereal boxes, and instructions for seeing the eclipse by watching shadows. Younger children stayed home with parents or grandparents and watched holding cold beverages on a sweltering patio.

Some residents planned vacations or weekend getaways, so they could experience the totality. In short, residents of McHenry County got swept up in the eclipsomania with the rest of the nation.

Tina and Dennis Stipati from Crystal Lake traveled to Springfield for the weekend before deciding on Pinckneyville as their totality destination. They considered weather and distance from home in their decision-making. Pinckneyville boasted a totality of 1 minute, 57 seconds, 43 seconds less than Carbondale, where totality was the longest.

“Two minutes is the length of a Dale Carnegie speech,” rationalized one viewer. “That’s long enough for me.” 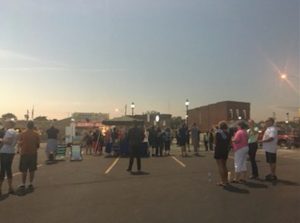 Observers in Pinckneyville, during the totality. (Photo by Adela Crandell Durkee/for Chronicle Media)

Pinckneyville is about 30 minutes north of Carbondale. McHenry County residents who chose it as a destination got a head start for the trip back home.

“I travel a lot,” said Dennis Stipati, vice president of sales at Radwin, a telecommunication company based in Israel. He conceded that this could be the last time he got a get a chance to see the totality. “We’re lucky we could do it. Sometimes I’m running so much, sometimes things happen and I wish I would have taken the time and done that. Tina spurs me on.”

The couple agreed that this was one of the experiences they wanted to add.

“It was awesome,” said Tina. She and Dennis settled in at the nearby fairground.

When the totality hit, the darkness enveloped them in an instant.

“The ring around the moon was like nothing you’ve ever seen. Suddenly, it was dark. People cheered and the crickets sang.”

Another observer compared it to “The Eye of Rah,” a science fiction reference to an Egyptian myth. “It was like a huge black orb in the sky surrounded by a ring of fire.”

In McHenry County, the moon partially eclipsed the sun, covering approximately 87 percent. It was a cloudy day, still, the special glasses, cardboard cutouts, and shadows allowed people like Linda Rudnik from Marengo to experience movement of the moon in front of the sun.

“Without glasses, you could go about your whole day and not know the eclipse was happening,” said Rudnick. “Viewing the moon moving in front of the sun was really interesting.”

Another observer commented on the difference in the darkness experienced during the totality, compared to night as a deep blue, but not black.

If haven’t experienced the totality, consider this, another total eclipse of the sun occurs again in 2024. The zone of totality goes right through Illinois once again.

–Totality awesome: Those who trekked to southern Illinois for eclipse found it worth the trip–