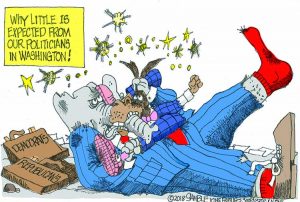 Here’s a pop quiz: What is the name of North Korea’s capital city? If you said “Pyongyang,” you probably have an above-average recall. I didn’t want to make it too easy. The name Kim Jong Un still should ring a bell, but if the details of his much-ballyhooed meeting with President Donald Trump have faded, don’t worry. That was sooooo two weeks ago, and we Americans have the memory span of a gnat.

Since that historic Trump-Kim negotiation to defuse the ticking nuclear time bomb, we have moved on. All the glaring images from Singapore (the location of their get-together, in case you’ve forgotten) have faded to almost nothingness. The bluster that preceded the event and the lies and exaggerations from Trump afterward have evaporated into the political void. All the experts on Kim who were dusted off to saturate the news channels have been stored away again. Onward and downward we go.

The following week we moved on to another blow-up, as the United States of America performed its best imitation of North Korea, snatching children away from the parents who brought them along as they dared to breach our borders. It’s becoming routine for us as we witness one outrage after another. The constant cruelty, buffoonery and outright lying of this administration and its leader, the Trumpster, become symptoms of a chronic national sickness.

This, too, will fade into outrage oblivion, along with all the atrocities that have sadly become part of the news loop: The shooting massacres that have resulted in zero action taken to control access to guns and all the outlandish hatefulness, scandals and embarrassments simply will add to our societal malaise. Gone and all but forgotten.

Those politicians and commentators who wring their hands and state that this time we’ve been dragged too far down soon will confront some new low in the country’s limbo dance. Their premise that voters will remember and act on their disgust at the polls gives us far too much credit; nobody remembers.

Blame a number of factors: There are the constant distraction from not just chaotic social media, which have become the megaphone for our worst instincts, but also from professional news organizations, which no longer are honest brokers. Most parrot the baked-in views from whichever side feeds their bottom line.

We have constructed a massive Tower of Babel, speaking in tongues about our embedded resentments. Progressives despise the harsh bigotry and ignorance that motivate conservatives, certainly those millions who are Trump supporters. Trump supporters have equal contempt for the self-serving, smug condescension of liberals.

Both knee-jerk points of view are on the money. So there is no conversation, just shouting. No solutions offered, only blame. For what? No one really remembers. Nevertheless we face the upcoming Nov. 6 midterm election. It will be all about turnout, turnout, turnout. And turnout will be determined by the turnoff of whatever bizarre depravity last dominates the headline machine on Nov. 5. Whatever the result, the divisions will multiply.

Still, many wise people counsel that we’ve gone through downward spirals before, but the nation has always come out of them and thrived once again. This time, the wise people may be wrong, their hopes misplaced.