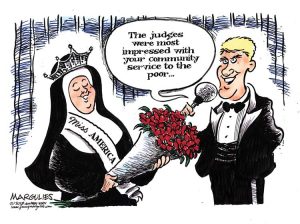 Justin Trudeau may be the annoying, youthful avatar of chic progressivism — but he’s not our adversary.

After leaving the G-7 summit, President Donald Trump blasted the Canadian prime minister on Twitter as weak and dishonest, in the kind of invective once reserved for “Little Rocket Man.”

The Trump presidency routinely produces unprecedented events, and here is another: Never before has a president of the United States spoken as scornfully in public about the head of state of a friendly, allied country. Particularly one who has appeared in Vogue.

Trudeau is not exactly a threatening figure, although his worshipful, celebrity-fueled press coverage qualifies as one of the more vexing political phenomena in all of North America (Rolling Stone celebrated the fact that he rides a unicycle; TMZ declared him on the “clear path to hottest leader in the world”).

It’s not clear what exactly led to the great U.S.-Canada tiff of 2018. White House aides fanned out over the weekend to try to lend meaning and justification to the flap.

They said Trudeau had stabbed the president in the back at the meeting. But Trudeau didn’t say anything after Trump left the G-7 that he hadn’t signaled before — namely that Canada finds Trump’s steel and aluminum tariffs insulting and will retaliate.

The incident is a great misdirection. Canada’s trade practices are hardly above reproach. Its tariff on milk of 270 percent, highlighted by Trump officials the past few days, is stupid and indefensible. It is guilty of subsidizing and protecting favored companies and sectors, the way most countries are.

It is nothing compared with the world’s great mercantilist power, though. China routinely steals U.S. intellectual property, seeks to distort the entire system of international commerce to its advantage, and is pouring resources into a massive military buildup, with which it eventually hopes to expel the United States from East Asia.

Trudeau is the facile, democratically elected leader of a Western society; President Xi Jinping is the remorseless president for life of a hostile dictatorship. It’s not a remotely close call who we should be aiming our fire at.

That we are dissipating our energies with steel and aluminum tariffs against allies and potentially alienating friends in what should be a united front against China speaks to a key mistake. Trump views the U.S. trade deficit — with any country, friend or foe — as the problem rather than China as the unique commercial and geostrategic competitor.

The flare-up with Trudeau is not an encouraging sign for prospects of renegotiating NAFTA, which also should be viewed in strategic terms. As Derek Scissors of the American Enterprise Institute points out, the trade agreement could extend beyond North America to Britain, which is seeking a new trade arrangement as it exits the EU, and the Philippines and Taiwan, which are pressured by China.

None of this will happen if Trump is determined to pursue a protectionist policy no matter what, or he lets his pique at friends get the best of him. The trade war — and the fight for our paramount interests — won’t be won or lost against Justin Trudeau. Beijing, not Ottawa, is our enemy.

–Canada is not the enemy–